This article appeared in TLS #43. 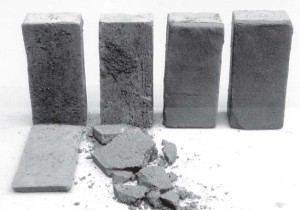 1) General. Earth plasters mainly consist of sand and silt with only as much clay as is necessary (usually between 5% to 12%) for developing their adhesive and binding forces. It is difficult to state what the proportions of an ideal earth plaster should be, because not only does the proportion of clay, silt and sand influence the properties, but also the grain size distribution of the sand fraction itself, the water content, the type of clay, the method of preparation and the additives. In order to test the appropriateness of earth plasters, samples with varied compositions should be tested. Earth plasters stick very well not only on earth surfaces, but also on brick, concrete and stone surfaces, if the surface is rough enough.

2) Preparation of substrate. As earth plaster does not chemically react with the substrate, the surface has to be sufficiently rough in order to develop a good physical bond. A good method of getting a strong bond is to wet it sufficiently until the surface is soft, and than scratch diagonally patterned grooves with a small rake or a nail trowel. In order to ensure that the plaster adheres better, it is also possible to use latching in the form of galvanised wire mesh, plastic mesh, reed mats, and such on the substrate before plastering.

3.1 General. In order to get earth plaster free of shrinkage cracks, the following points must be kept in mind:

In order to test the characteristics of an earth plaster, a simple adhesion test can be carried out. The plaster to be tested is applied 2cm(3/4-inch) thick to the flat surface of an upright burnt brick. The plaster has to stick to the brick until it is totally dry, which might take two to four days.

If it falls off in one piece by itself, as seen in the left sample of fig. 3-1, it contains too much clay and should be thinned with coarse sand. If it falls off in portions after the sample is hammered on the floor like the second sample in fig. 3-1, then it has insufficient binding force and should be enriched with clay. If the plaster sticks to the brick but shows shrinkage cracks, like the third sample in fig. 3-1, it is too clayey and should be slightly thinned with coarse sand. However, it can be used without thinning as the first layer of a two-layer plaster. If the surface shows no cracks and the plaster does not come off when hammered, as in the fourth sample in fig. 3-1, then the sample might be adequate. In this case, it is advisable to make a larger test about 1x2m(40×80-inches) high on the actual wall. If shrinkage cracks now occur, this mixture needs either to be thinned with coarse sand or mixed with fibres.

3.2 Exposed exterior earth plasters. Exposed exterior plasters have to be seasonably weather resistant or must be given perfect weatherproof coating. It is important in cold climates that the plasters together with their coating have a low vapour diffusion resistance, so that water condensed in the wall can be easily transported to the exterior. The exterior plaster must be more elastic than its ground in order to meet thermic and hygric influences without cracking. In general, for cold climates, an external earth plaster is not recommended unless sufficient roof overhang, plinth protection and good surface coating can be assured.

Since plastered wall edges are very easily damaged, they should either be rounded or lipped with a rigid element. In extreme climates when the elasticity of large expanses of flat plaster is insufficient to cope with the influences of weather, vertical and horizontal grooves filled with elastic sealants are recommended. 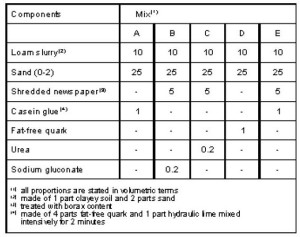 3.3 Interior earth plasters. Interior plasters are less problematic. Usually they create no problem if they have fine shrinkage cracks because they can be covered with a coat of paint. Dry earth plaster surfaces can be easily smoothed by wetting and being worked upon with a brush or felt trowel.

If the surface of the walls demands a plaster thicker than 15mm(5/ 8-inch), it should be applied in two layers, with the ground layer containing more clay and coarse aggregates than the second layer. If the ground layer gets shrinkage cracks, it is not problematic, but could actually help by providing a better bond to the final layer of plaster.

Adding rye flour improves the surface against dry and moist abrasion. The author has proved by testing that this resistance can also be built up by adding casein glue made of one part hydraulic lime and four to six parts fat-free quark, borax, urea, sodium gluconate and shredded newspaper (which provides cellulose fibre and glue). The mixes in the accompanying chart worked well.

Lime reacts with the casein within the fat-free quark forming a chemical waterproofing agent. A similar reaction is obtained with lime and borax (which is contained in the shredded newspaper). Sodium gluconate acts as a plasticizer so that less water needs to be mixed for preparation (thereby reducing the shrinkage). Urea raises the compressive and the tensile bending strength, especially with silty soils.

Waste paper shreds lead to better workability and reduce shrinkage. The mixes B, C and E showed best workability. When using mixes A and E, it is preferable to first mix the casein glue and the shredded newspaper together with the water, and then, after an hour, add earth and sand.

With all mixes, it was found that the final smoothing of the surface, which was done by a felt trowel, was best done after several hours or even a day.

4) Guidelines for plastering earth walls. As pure earth plaster does not react chemically with the substrate, it might be necessary to treat the substrate suitably so that sufficient bonding occurs. The following guidelines should be kept in mind:

1. The surface to be plastered has to be dry, so no more shrinkage occurs.

2. All loose material should be scraped off the surface.

3. The surface should be sufficiently rough and, if necessary, moistened and grooved or the mortar joint chamfered, as described in section 2.

4. Before plastering, the substrate should be sufficiently moistened so that the surface softens and swells and the plaster permeates the soft layer.

5. The plaster should be thrown with heavy impact (slapped on) so that it permeates the outer layers of the ground and also achieves a higher binding force due to the impact.

6. If the plaster has to be more than 10-15mm(3/8-5/8-inch) thick, it should be applied in two or even three layers in order to avoid shrinkage cracks.

7. To reduce shrinkage cracks while drying, the mortar should have sufficient amount of coarse sand, as well as fibres or hair.

8. To improve the surface hardness, cow dung, lime, casein or other additives should be added to the top layer.

9. In order to provide surface hardness and resistance against wet abrasion, the surface should be finished with a coat of paint[Editor’s Note: breathable paint].

10. While using plasters, the change of physical properties caused by additives and coatings should be kept in mind especially with respect to vapour diffusion resistance. 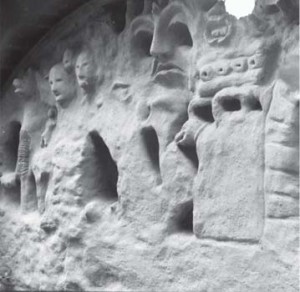 5) Sprayed plaster. A sprayable lightweight earth plaster with high thermal insulation containing shredded newspaper was successfully developed by the author in 1984. This plaster can be applied in a single layer up to 30mm(1-1/4-inch) thick using an ordinary mortar pump. In order to get a shorter curing period, some high-hydraulic lime and gypsum was added to the mixture. 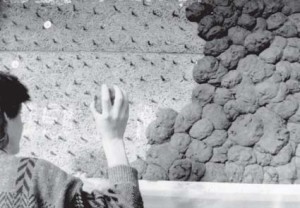 6) Thrown plaster. Fig 6-1 shows how a traditional African technique, which consists of throwing earth balls on a wall, has been adapted. Here, this technique is used on a wood-wool board for a winter garden wall. In order to increase the adhesion, bamboo dowels were hammered halfway into the board.

7) Wet formed plaster. As loam plaster retains its plastic state for a long time and is not corrosive to the hands like lime or cement plasters, it is an ideal material for moulding with the hands. Fig. 7-1 shows an example of an exterior loam wall stabilised by a lime-casein finish.

Professor Dr.-Ing. Gernot Minke is a professor at Kassel University and a consultant structural engineer since 1967. He has a keen interest in earthen structures and low-cost, low-impact housing. He numerous publications include the Earth Construction Handbook (WIT Press, Southhampton, Boston, 2000). Contact: <[email protected]>

This article was submitted by Friedemann Mahlke, a student of Dr. Minke and a straw-bale builder and researcher. Contact <[email protected]> 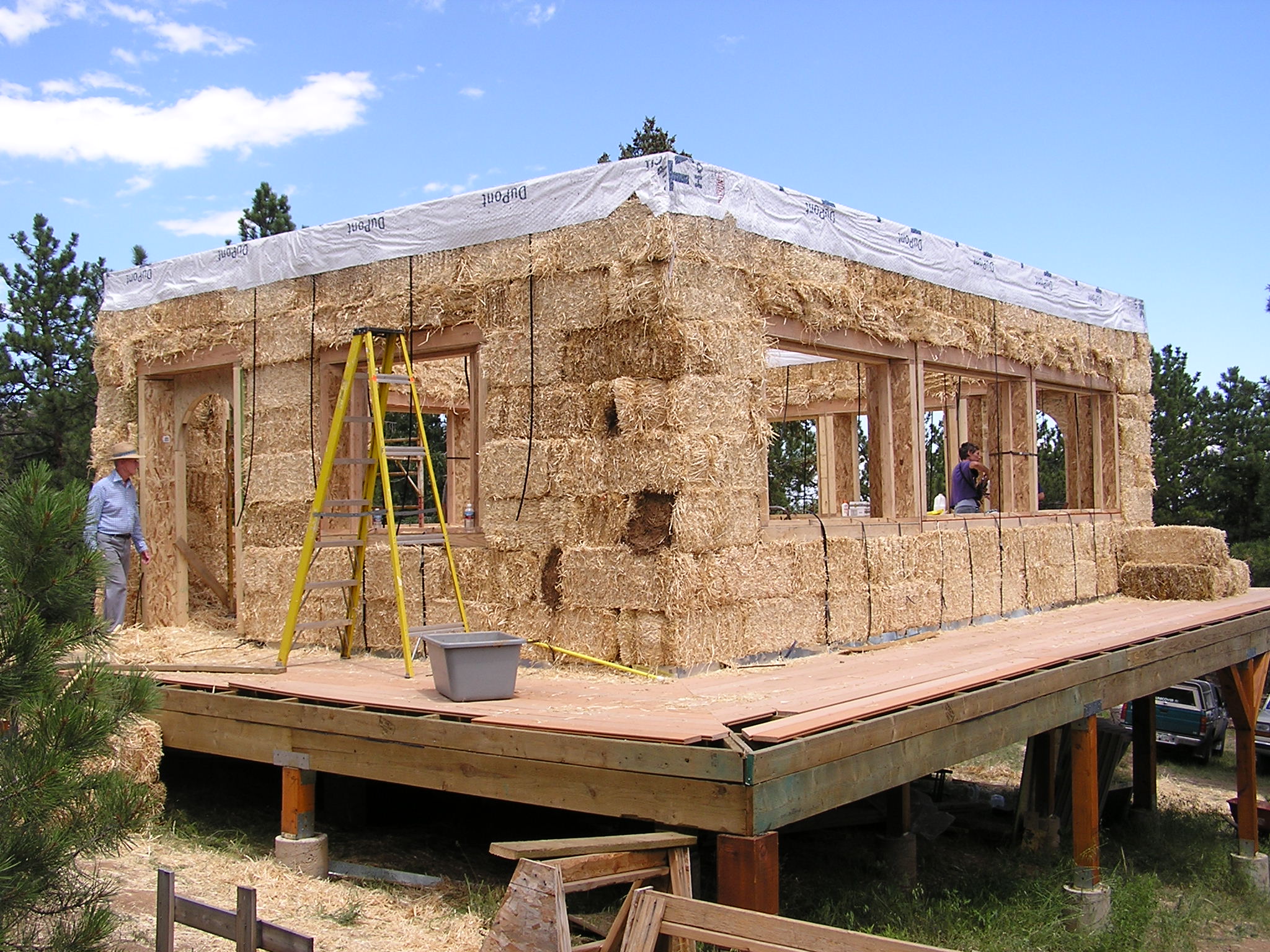