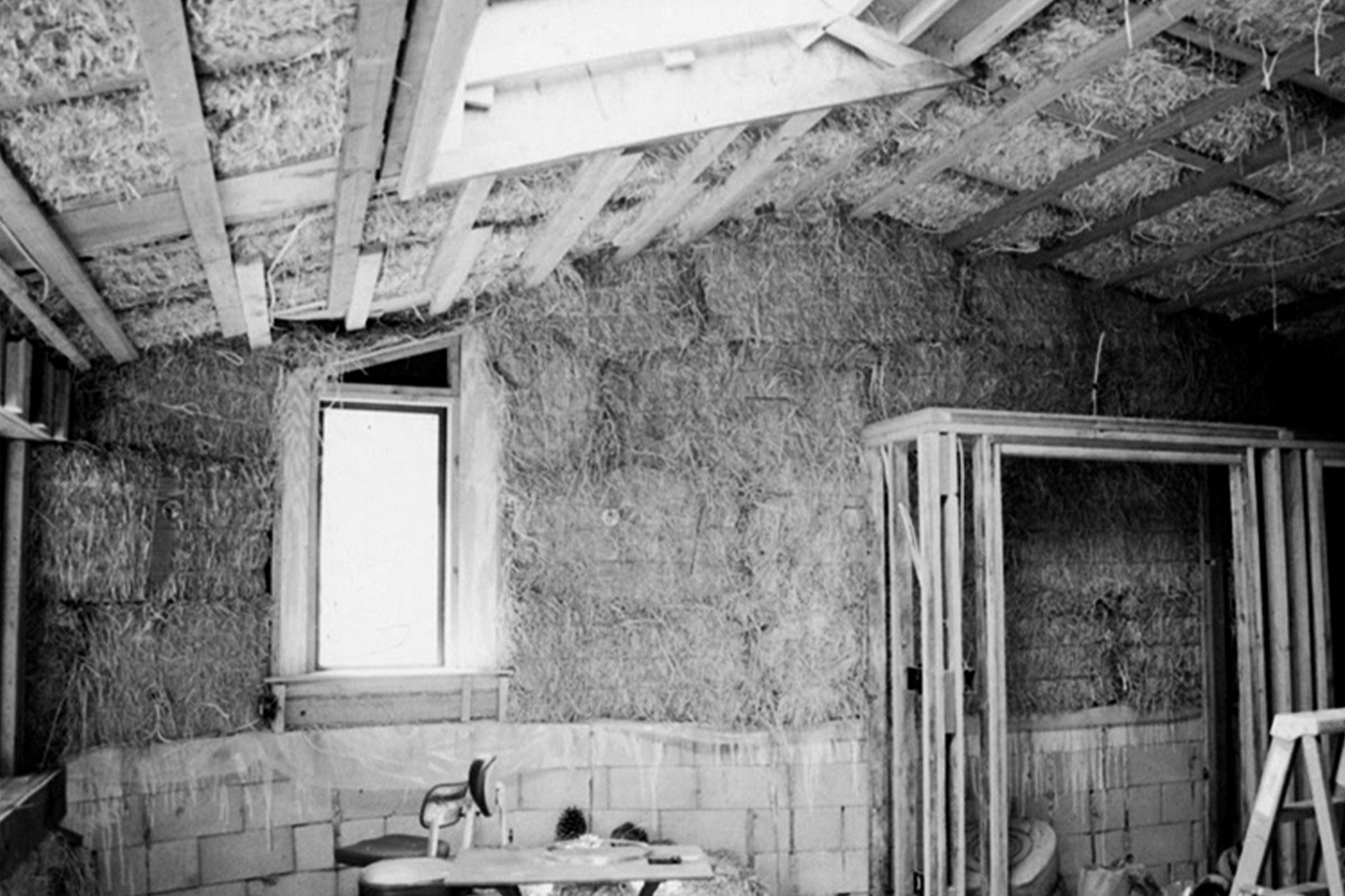 Adapted from an article that appeared in Home Power Magazine. 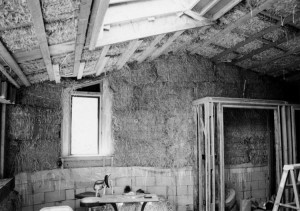 The definition of sustainability we use in our work is to use resources that meet our needs but do not compromise the ability of future generations to meet their needs. As our firm and the work we do evolved, our practice has evolved to encompass broader issues including life cycle impacts of materials, miniaturization of infrastructure, health issues in buildings, permaculture and landscape regeneration.

By 1994, we had developed a comfortable working environment, consisting of a mix-used passive solar complex that included an office, shops and a residence on an old trout farm adjacent to the Los Padres National Forest, 12 minutes north of the city of San Luis Obispo. Little did we imagine that we would endure the trauma of losing nearly everything we owned or that this tragedy would afford an opportunity to redevelop our complex based on our new knowledge of sustainability. In August 1994, the 41 Wild Fire that burned 40,000 acres/16,200 hectares in our area destroyed our entire complex, and forced us into applying these broader principles of sustainable design for ourselves. Once we got over the initial shock of losing an extensive library, slide collection, office and home, it became more and more obvious what an opportunity our natural fire-oriented local ecology offered us – we could start from scratch and build sustainably, without the problem associated with retrofitting existing structures.

One of the first things we realized was that the fire had left us with a large inventory of building material. (We had several strawbale benches on the site before the fire. They turned out to be more fire resistant than most of the stucco-, tile- and metal-clad buildings in the canyon.) It had killed most of the mature trees (except for 2/4 of the fire-adapted oaks), and these trees were now available to use as lumber. We would never have dared touch them while they were alive. In addition, the massive opening-up of the landscape afforded by the fire allowed us to examine our aging infrastructure. We realized it could be redone in a much more sustainable way. Landscape regeneration became an everyday reality, not some theoretical subject. We suddenly could do things that we had only talked about, but never had the time to do – like getting off the electrical grid. 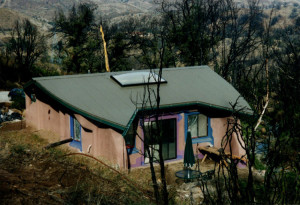 Right after the fire, it was necessary to develop a base of operations – a place to store tools, plan from and live in. We attempted to combine this need with several others, such as providing future retreat for guests and visitors, as well as a demonstration workshop for our senior sustainable design architecture class at Cal Poly State University. The result was a 500 sf/46m2 cottage that we built on a slab that was left from a shed we had removed long ago. his was one of the few slabs in the canyon not destroyed by the re, because it supported no flammable building at the time. For the structure of this building, we used fire-damaged telephone polls with a truss joist frame. We built the walls from rice straw bales laid on edge, which provide good insulation. In addition, the stucco finish provides interior distributed thermal mass. For the ceiling, we used wheat straw bales laid flat between TJI rafters, which also provide good insulation. The roof is corrugated steel sheet, and includes a 4-ft.x 8-ft/1.2mx3.4m skylight with skylid (movable insulation) unit. Our electrical power came from a Pelton wheel (a microhydro system) on the creek connected to storage batteries.

The construction of this building used healthier building materials that produced less waste. The unused straw was used for erosion control on the site. The building also gets much of its heat from the sun, and uses waste as a resource. In addition, the structure served as a prototype to test details that we planned to use in the larger buildings.

In sustainable design circles, there is a lot of talk about the advantages of using regional materials. As practitioners, we always had nagging doubts about how much of this is truth and how much is idealized theory. Once construction of the guest cottage was underway, we turned our attention to testing this theory. There were several stands of mature trees on the site, especially in the creek areas. The oaks, Sargent cypress and several pine species were native. The Douglas fir and redwoods were not, although their natural range on the coast extends to just 10 miles/48 km north of the site. They were planted 33 years ago when the trout pods were developed. After the fire, all the redwoods put our new growth immediately, and three-quarters of the oaks sprouted from at least part of the remaining trunks. The other trees were killed. We now had an opportunity to do what passive solar applications do – use resources directly on the site rather than importing them from far away and exporting the impact elsewhere.

We felt obligated to mill the dead trees into lumber for reconstruction. We hired sawyers to do this during the fall of 1994, suing a wood Miser portable mill. Both we and the sawyers were amazed at the quantity and quality of wood produced in this relatively small area. We harvested 22,000 board feet of lumber, enough for construction of the other buildings with enough left over to be a storage, rain and sun protection chore. The economics of this also created the unusual condition of using straw-bale construction in conjunction with heavy timber construction, as it was more economical to mill big pieces rather than small ones.

The result of this experience was very interesting. The wood we obtained cost about the same as it would have from a lumberyard, but the quality was much higher. In addition, all phases of the life cycle of this material – source, transport, processing, use and source regeneration – happened on the site. Waste could not be exported elsewhere. It became a resource used for erosion control and organic matter for the regenerative process.

It became obvious to us that although the first costs of both milling our own lumber and buying it from a lumber yard were about the same, the long-range environmental costs of milling our own was much less. These costs are not often accounted for in our present economic system. 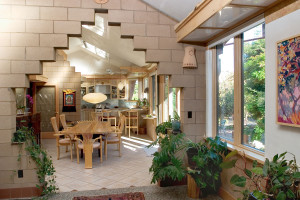 The next step was construction of the studio and office, completed at the end of March 1995. Because of the function of this building, we placed great emphasis on natural lighting in addition to the passive solar design. The studio/office is also off-grid, powered by photovoltaic (PV) panels over the library/research area, with a Pelton wheel on the adjacent creek for use as backup in the winter when the water is high. (Two streams fed by the nearby mountain range flow through the property.) The studio/office is heavy timber-frame construction with straw-bale infill.

The south side of the office is configured to allow maximum sun penetration in the winter and begins to shade itself in early April. During the summer months, it is totally in shade, picking up sun again in late September. Parts of this facade are view windows, part unvented 12-in./30cm Trombe walls that also act as shear walls, and part 9-inch-thick/23cm water tanks below the south-facing window on each end that act as indirect gain passive heaters. The Trombe walls and water tanks are painted with a selective surface paint on the sun-facing side.

The wiggly light shelf on this south facade serves two purposes: providing summer shading of the windows and low water tanks and throwing light deeper into the building in winter. This office is also designed for maximum night ventilation. Summer breezes generally flow from southwest to northeast, so the air moves through the long dimension of the office. These breezes, coupled with the large amount of distributed thermal mass in the building, keeps the interior temperatures below 79oF/26oC, even when daytime summer temperatures are quite hot, occasionally reaching 110oF/43oC.

The two-story residence of the complex was completed in October 1997. We used construction techniques similar to those in the office, except that the heavy timber structure is placed 6 in./15cm inside the straw-bale walls. This configuration allowed us to expose the beautiful timber frame and create a continuous two-story straw-bale wall without interruption of the north side. The curves of this wall were very easy to achieve with straw bales without any added expense. This is the best arrangement of the timber structure and bale walls we’ve found to date. There are remarkably few cracks in this wall. The contrast to the stuccoed wood shear walls on the east side is very telling.

The residence uses interior 8-in./20cm concrete block walls as shear walls, thermal mass and decorate “gates.” Besides south-facing glass, skylights provide direct gain, with skylids as thermal control. We’ve found that this system offers more flexibility in the fall and spring than fixed overhangs.  The El Nino weather pattern sometimes produces a very unusual cool late spring, which we cannot respond to in the studio with its fixed overhangs. The skylight/skylid arrangement in the residence did allow us to respond to these unusual climatic conditions. The residence is also off-grid, powered by the PV system and Pelton wheel backup that provides electricity to the rest of the complex. 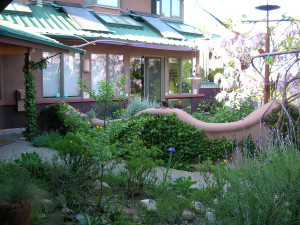 One of the unexpected joys of this whole ordeal has been to experience the rapid regeneration of the landscape following the fire. Fire is such an integral part of the native California landscape that everything is set up for it. The first spring was dominated by delicate fire poppies, which only appear in newly burned areas.   In this case the seeds had been waiting 60 years for their chance – it had been that long since this area last burned. The next year was dominated by morning glories, which spread all over the armature of the burned branches of earlier plants. The third year was the year of low herbal plants – sages, bush poppies, soap roots and others.  In the fourth year, we found the Ceonothus (wild lilac) dominating. The regeneration of oak and cypress trees then began to be much more noticeable.

The best wood for reconstruction turned out to be the Sargent cypress, used for the structure and trim. Alder was the best for cabinets. The cypress trees regenerated naturally because they were a fire species whose seeds are stimulated when they are burned. When the office was done, to commemorate the wonderful alder cabinet it contains, we planted several times the number of alders in the creek than were there before the fire.

We’ve found that the application of our design theories to our own situation has helped convince clients and others that sustainability is more than just another theory. It is a way of achieving better value while simultaneously having far less impact on our planet. In fact, once we get beyond the fears of scarcity that haunt our industrial culture, we will see that these two values – better quality and ecological correctness – are interrelated.

Ed.Note – An article about the curved wall straw-bale workshop building (not pictured in this issue) at Ken and Polly’s complex will be included in TLS#60/Details, Details, Details. It’s amazing in its design and structure.