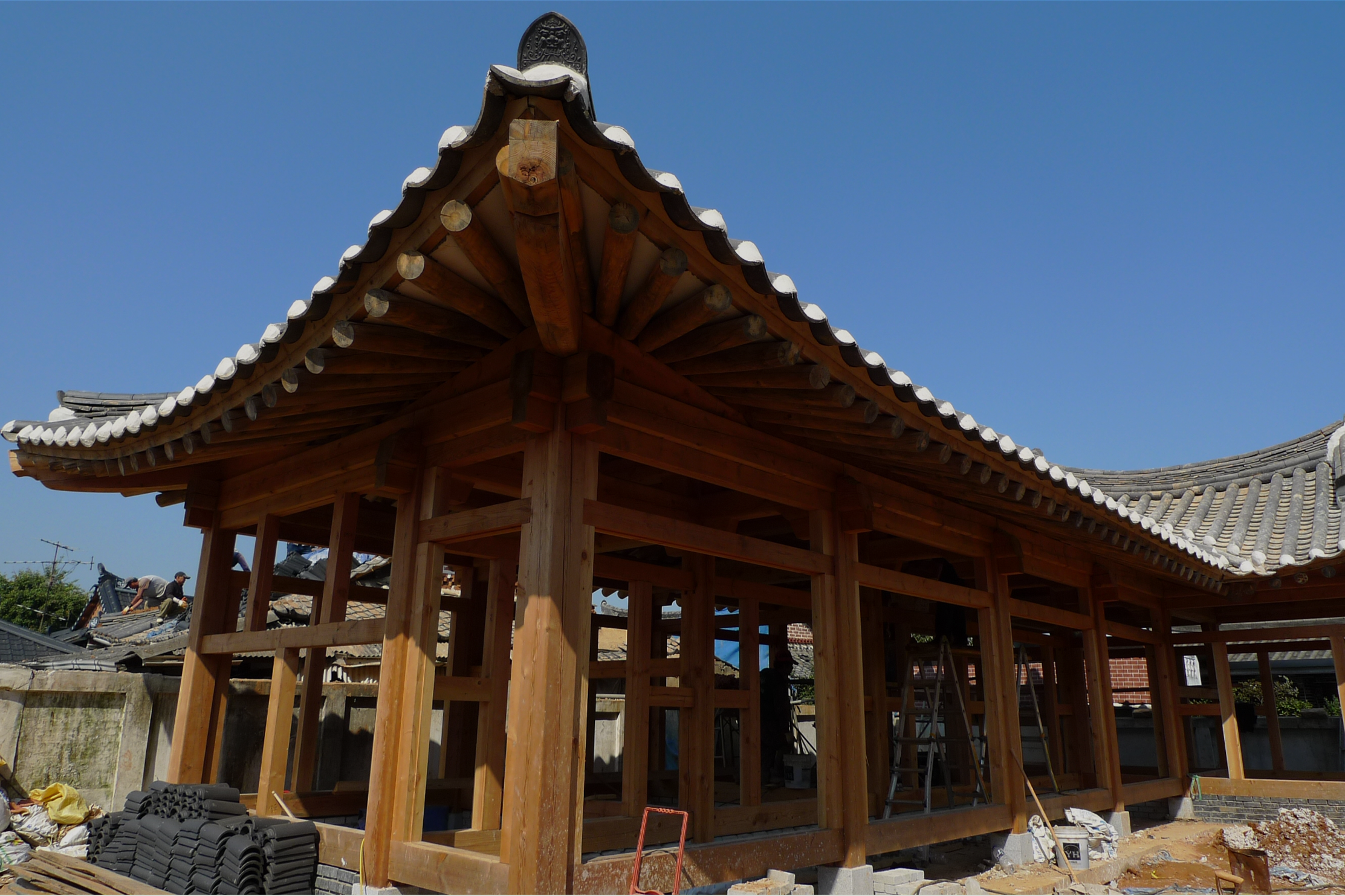 Editors Note – This article is a feature length pictorial look at the various aspects of natural building in Korea.  The full-length article will be in the upcoming issue of The Last Straw and is available in its entirety right here on the website for subscribers.  Make sure you have a subscription soon so you won’t miss this stunning array of natural building techniques.

Traditional Korean homes generally have a timber frame with adobe or wattle and daub infill, though regional variations are found throughout the country.

Especially on Jeju Island where volcanic rock and strong winds are abundant, homes traditionally consisted of a double wall system with an exterior wall of volcanic rock surrounding an interior wall, creating a protected corridor around the house.  This in turn, protected the interior walls from wind and rain and improved the thermal performance of the home.  Also because of the strong winds, thatched roofs were generally secured by a net of straw ropes.

Another characteristic of traditional Korean homes is the use of ondol, heated floors. The exhaust gases from wood fires travel under the living space, heating the floor above, and exit a chimney.

There are two types of ondol:

1. Ondol that use the firebox additionally for cooking.

2. Ondol whose firebox is used simply to heat the floor.

In both cases, the firebox can be found inside or outside of the building.

Ondol are also called Kudul, which literally means stone.  The name derives from the fact that large, flat stones are generally laid over passages beneath the floor through which the hot exhaust gases travel.  These hypocaust channels are organized in numerous ways.

Above these stones are layers of compacted earth and plastered earth.  The floors are ideally finished with hanji, Korean paper, and may be coated with additional oils and waxes.

Depending on the region, roofs were constructed using different materials.  Straw and thatch roofs appear to be the most common, but wood was preferred in some areas and tile roofs were common in cities.

Earth as a Building Material

Walls were principally built with earth and finished in various ways.  As in many parts of the world, earth was a common building material and held a spiritual significance in Korea.  To Koreans, earth is the source of life.  Just as the seed grows from the soil, it was believed that life sprung from earth and returned to the earth.  Earth was not just a building material, but rather, earthen homes psychologically provide a safe abode, and for this reason, are still highly regarded in Korea.

Earthen architecture has a long history in Korea.  Suitable soils are abundant, locally available, and relatively easy to acquire.  However, the Korean War in the 1950’s and government housing policies in the 1970’s literally destroyed Korea’s earth building culture. 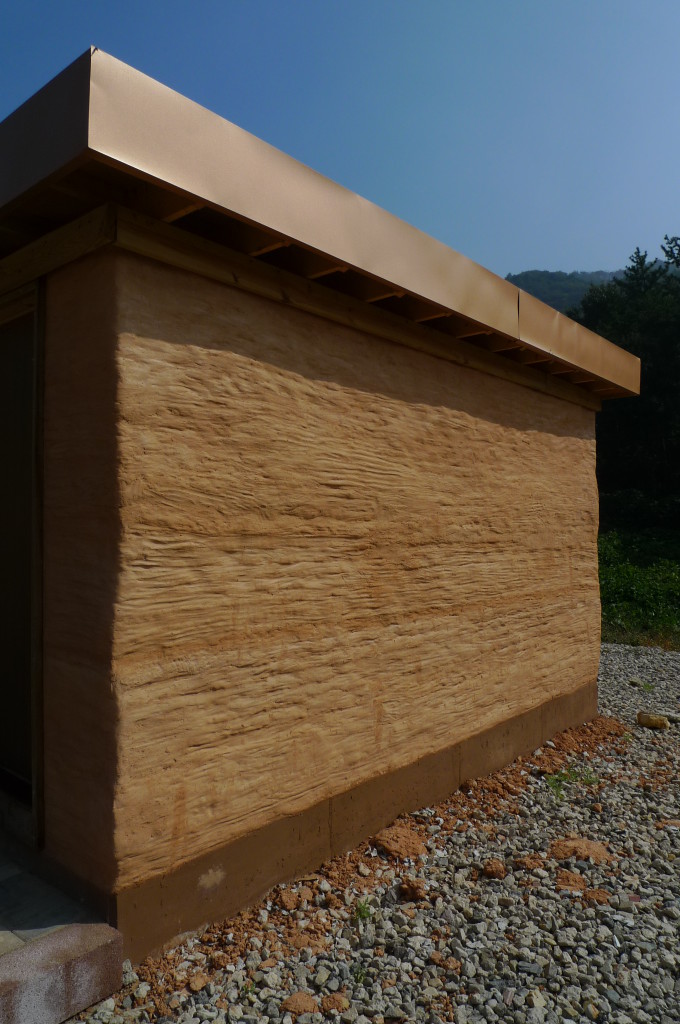 JaiSoon Ko’s Mud Ashram provides theoretical and practical courses in earth building for both professional and amateur builders.  JaiSoon Ko completed a PhD in philosophy at a German University and visited numerous ashrams in India, including Auroville, one of the world’s largest ecovillages.  There he encountered earthen architecture and since that time has built his own home and a complex of buildings at his DIY earth building school Mud Ashram.  Mud Ashram buildings feature adobe walls, earthen floors, and Ondol heating systems.

In Korea, there are many ways in which straw bales are utilized in building.  One popular method is to stack the bales between a double 2×4 frame.

Once the bales are stacked and secured, the wall is trimmed with a weed whacker.  This flattens the wall, making it easier to plaster, and produces an abundance of chopped straw.  The chopped straw is then mixed with plaster to prevent cracking.

There are various other organizations promoting natural building materials and methods ranging from intentional communities to small local groups.

Another natural building technique gaining in popularity in South Korea is earth bag construction. Earth bag building involves stacking and tamping sandbags filled with earth in order to create bearing or infill walls, and is suitable for DIY construction.  For example, Ms. Hwasoon Lee, age 62, built her own earthbag house and is now building a home for her mother.

Understanding the connection between the built environment and personal health, SongWook Yang’s EcoHealing School teaches natural building and healing techniques.  For example, beginning in the spring of 2013, SongWook Yang will begin construction of a series of earth bag domes, which will provide housing and classroom space for a new school.

The Dandelion Community and School in Jinan County promote natural building materials and methods, such as rammed earth, straw bale and earthen plasters and provide training in renewable energy systems.  One of the founders, Dongkeun Lee, studied at the Centre for Alternative Technology in Wales and strives to create something similar at the Dandelion Community.

Korea’s certified slow cities preserve traditional Korean culture including food and architecture.  The slow city movement originated in Greve, a small town in the Chianti region of Northern Italy, where it is known as Cittaslow.  A city needs to possess certain characteristics in order to be designated a Slow City. For example, Slow Cities should have no more than 50,000 residents, should have unique local cuisine made the old fashion way, without using machinery, and the city’s traditional heritage should be well-preserved. The town should have no fast food restaurants, large department stores or wholesale suppliers.  Eight places in Korea have been designated Slow Cities. These are Jeungdo district in the Sinan region, Cheongsando district in the Wando region, the Jangheung region of Jeollanam-do province, the Hadong region of Gyeongsangnam-do province, Changpyeong district in the Damyang region, Yesan region of Chuncheongnam-do province, Joan-myeon in Namyangju-si City, and Jeonju Hanok Village. For example, the Changpyeong district in the Damyang region not only preserves traditional architecture, but also builds new buildings using traditional natural building materials and methods.

Kyle works as a builder, consultant, researcher and educator specializing in natural building materials such as straw bale, light straw clay and natural  plasters. He has a PhD in Bioresource Sciences from Nihon University where he researched the hygrothermal environment of straw bale walls in Japan and building practices to control moisture. Apart from academia, Kyle has studied natural farming in Japan, permaculture in Australia, and organic and biodynamic farming in the US.  Further details can be found at the following links:
http://holzhueter.blogspot.com
http://japaneseplastering.blogspot.com