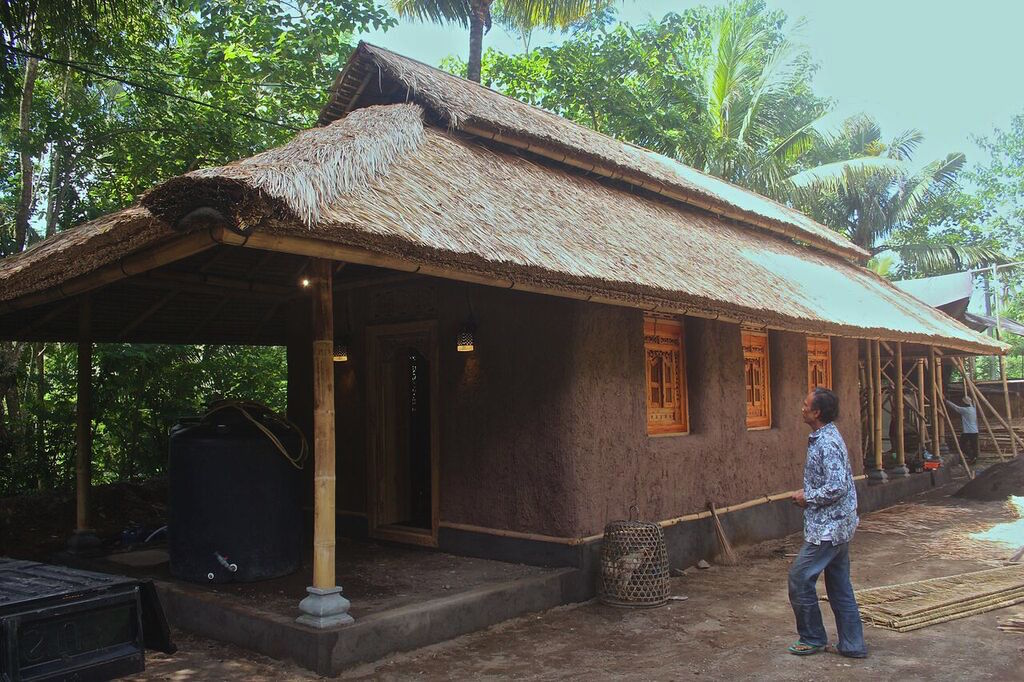 Personally, I believe every person has the desire and ability to leave a positive impression upon the earth, whether the footprint is big or small. I hope that my passion for building with straw bales in remote areas can inspire others and together we can make a difference one bale at a time.

For me, the first time I heard about straw bale buildings (in the 80‘s), it made sense and the seeds of interest were planted. It took many years of gestation that eventually has led to the current project that has enriched my life and hopefully the lives of others within the small Village of Nawa Kerti in the Karangasam region of Bali, Indonesia.

My career as a licensed architect in California was based in Marin County. For 16 years I worked on projects that reflected my clients dreams and I was fortunate to have some very wonderful clients.   I gained a lot of experience during those years, but as I reach middle age, it’s time to put those skills to use in a way I had idealized when I entered architecture school many years ago.

But as the detours of life would have it in 2003 my husband, 5 year-old daughter and I set off on our 36-foot sail boat across the Pacific ocean for a 4-year adventure (another story) that led us to New Zealand. When sailing, one has the luxury of time to reflect and I felt a thirst to revisit my fascination with straw.    I set up an interview with a straw bale design/ build company which had the added bonus of an overnight stay in their straw bale guest house. It was delightfully warm inside that little bale building in comparison to the cold drizzling rain outside and we never even used the fireplace.

However, we didn’t end up staying in New Zealand; during the windy rains – a tropical breeze cracked opened another door of opportunity into the magical world of Bali, Indonesia and we were swept back into the tropics once again. We would be working on a mega yacht design project that lasted 6 years.

Upon seeing Bali’s rice terraces and burning fields, my desire kept rekindled. There was an abundance of straw smoldering away in the fields sending clouds of billowing white smoke into the sky, releasing tons of carbon dioxide back into the atmosphere. It didn’t seem Indonesia had been introduced to the notion that this waste could be used as a building material. Plus, rice straw was the best of all straws and they were burning fields three times a year…..I could see so clearly that this was an enormous lost opportunity – millions of possible homes could be built from all this waste. There was so much burning happening around the island – at times it was difficult to breathe.  Where our daughter goes to school, the wind blows all the smoke right into the classrooms during the burns. The health hazards for breathing this thick smoke are apparent in the number of cases of respiratory disease, which reported an estimated 20 million Indonesians were affected by respiratory problems in 1997, the last date reported that I could find.

Note the farmer in center of bottom photo surrounded by smoke

Dr. Karamveer Goyal, medical specialist cautioned farmers, “Smoke emitted as a result of burning rice straw affects our respiratory system and thereby other systems of our body.  Lung diseases and diseases of nose and throat get aggravated thus incapacitating the person.”   This is especially critical in children under the age of 5.

After reading every book I could get my hands on I began to feel like I was part of a small but large community.   Leading experts Andrew and Gabriel Morrison, and structural engineers Bruce King and Darcy Donovan took the time to return my emails when I had questions and encouraged me in my endeavors.

My mission began by speaking and I gave a number of talks around Bali to try and raise interest in hopes someone might want to build with Straw. The first obstacle was the fact that I had never build a straw bale building myself and that was a difficult hurdle to overcome when added to: building in a humid climate, creating bales with a manual press that had never been used before, working with locals who had never heard of building with straw and spoke another language (Bahasa Indonesian), which I wasn’t particularly skilled at.  I don’t think there’s a real problem with that do you?

At times it was very discouraging to keep hearing, “you can’t do that”, “it’s not possible,” “It won’t work in a humid climate,” “it’s a fire hazard,” etc.

But I felt strongly it was possible. We had already undergone tests to ascertain the viability of creating bale buildings on a tropical island on sample bales. The test bales were made with a pretty crude press, made with boards left over from a construction site and our feet for compression. Our only technical tool was a bona fide straw bale moisture meter. As luck would have it, it had rained the night before we collected the straw but the sun had dried the top strands enough to grab what lay on the top and stuff it into the box. After the bale was lashed and pulled out of the box, the readings on our little red meter were coming in at 18%!            2% below the maximum level allowed in the Building Code! Yahooo! We were in business!

So I kept talking, I even entered an international design competition for sustainable buildings in hopes of possible funding. It just seemed, if I talked to enough people, sooner or later I’d talk to someone who wanted to build with bales and be the first. This was an island full of creativity and sooner or later my spark would start a flame…right?!?!

It was several years later when I was visiting family in Florida, my Uncle suggested I bring the idea to his local Rotary Club in Tarpon Springs, Florida.    I sent in my presentation and to my delight Dr. Carrie Root and Deb Connelly – members of Rotary Club Tarpon Springs pushed the idea forward and began writing a grant that supported teaching locals how to build sustainably using waste straw in a remote Village in Bali. Rotary Clubs Holiday, Dunedin North, and Dunedin, Florida also participated in raising funds that were matched by District grant 6950 for a total of $16,800 USD which was awarded the following year!   I joined Rotary Club Bali Taman and have discovered a whole new group of people who like to help others.In Bali there are no baling machines so making bales by hand is the only option.

The “Bali Baler” was designed by architects: Jeni Kardinal and Frank Hyde. The idea is to keep the strands of straw as long as possible in the horizontal direction and to press in the shorter direction (unlike the typical “pine needle style baler”). The double levers are made from Iron Wood and the box is made of teak and plywood. Each section interlocks and comes apart. We can make 2 half bales (with a plywood divider inside the box) or 1 full bale measuring 50 cm x 50 cm x 100 cm in about 10 min’s per bale.

In Bali there are no baling machines so making bales by hand is the only option.

The idea to use fishing nets is from engineer Darcey Donovan who generously shared her knowledge and expertise with me from her experiences building in Pakistan. 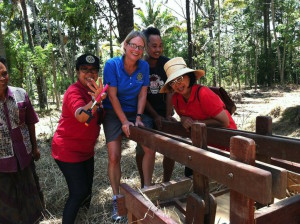 In Bali there are no baling machines so making bales by hand is the only option. 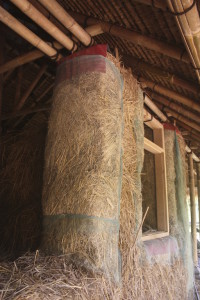 Our modifications included “used” fishing nets in the spirit of working with waste materials. The nets helped create shape to the corners.

Note the rubber matt at the top course to give us a bit of insurance against possible leaks from our natural grass roof , “alang alang” in the future.

Hand carved vent on top of the door shows the Rotary Logo. 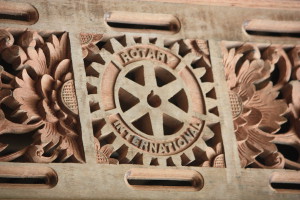 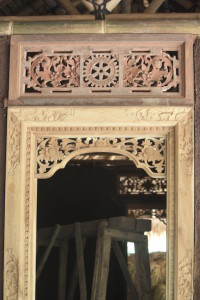 The first straw bale building in Bali will be used for making cold pressed organic virgin coconut oil, providing a sustainable business model within the Village. 100% of the income from the making of the coconut oil will go directly to the locals. The equipment for making the coconut oil is supported from a local fundraiser held in Bali last November, called “Build Blue”.

A special thanks to all the people in Rotary, especially RC Tarpon Springs who believed in this project from the start and gave their hard earned money to provide aid to a Village half way around the world. Thank you friends and family who also made contributions and to Kadek Suaradana who led the team in the Village. The people of Nawa Kerti are very grateful and proud to house the first straw bale building and have become new straw bale enthusiast. 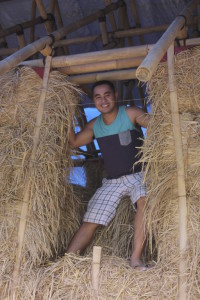 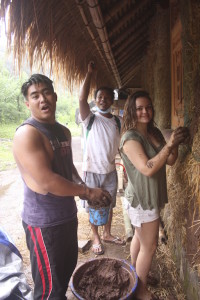 Plastering with Abby Hyde, Gede and They

I am delighted it has all gone so well and look forward to helping other Villages learn how to build as well. “Service not Self” is a Rotary motto I am proud to live by. 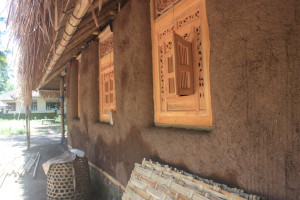 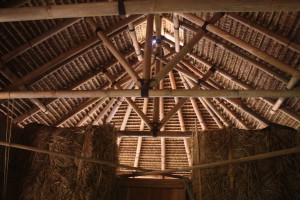 The interior treated bamboo truss designed by Jeni Kardinal has an upper vent to allow the warm air to rise out of the building keeping the interior space cool.

It would be great to build on the knowledge we have gained.   Hopefully this is just the beginning of our journey of leaving positive impressions as we step into the future.

Previously running a small office in Sausalito California: “Kardinal Architectural Services” remodeling and building new homes in Marin County until 2003 when it closed it’s doors to depart on a 4 year sailing adventure that led to New Zealand. Living in Bali, Indonesia with her husband Frank Hyde and daughter Abby for the last 8 years designing and renovating Sailing Yachts with Sea Trek Sailing Adventures and delving into the world of building with Straw to follow a long time desire to build sustainably.