The Mysteries and Properties of Clay

The mysteries of clay and its use in construction continue to fascinate me. My first exposure to houses made of earth was the mud brick homes of Central Victoria, Australia. The seemingly improbable, yet beautiful, hand-built homes changed my life’s path forever. Twenty years later, I have had the pleasure to work on numerous earth and straw homes. A happy day for me is working with the gifts of sand, straw and clay. Clay-based plasters have become my obsession over the years and are something that I derive much of my income from blending and applying. Still, the mysteries of clay have been slow to reveal themselves to me. In this article I discuss some of those mysteries and attempt to broaden the discussion amongst earth builders everywhere. Please feel free to contact me with questions, contradictions, or your own personal experiences.

Clay is considered to be material smaller than 0.002mm (Minke 2000). Not a very romantic vision of such an incredible building material. These very small particles are typically disc or hexagonal in shape, like little dinner plates. The disks have an electric charge that make them function like magnets. When dry, all the negatively charged sides of the disks cling to positively charged sides of another clay disk next to them. This function gives the clay a binding force. The addition of water separates the disks far enough apart to weaken the electric charge. When the water dries, the charge is re-activated, binding the clay back together. Thus clay is in a constant state of flux and never sets. The miracle is that when sand and straw are added to clay it maintains a solid state that can function as a high performance building material for centuries. 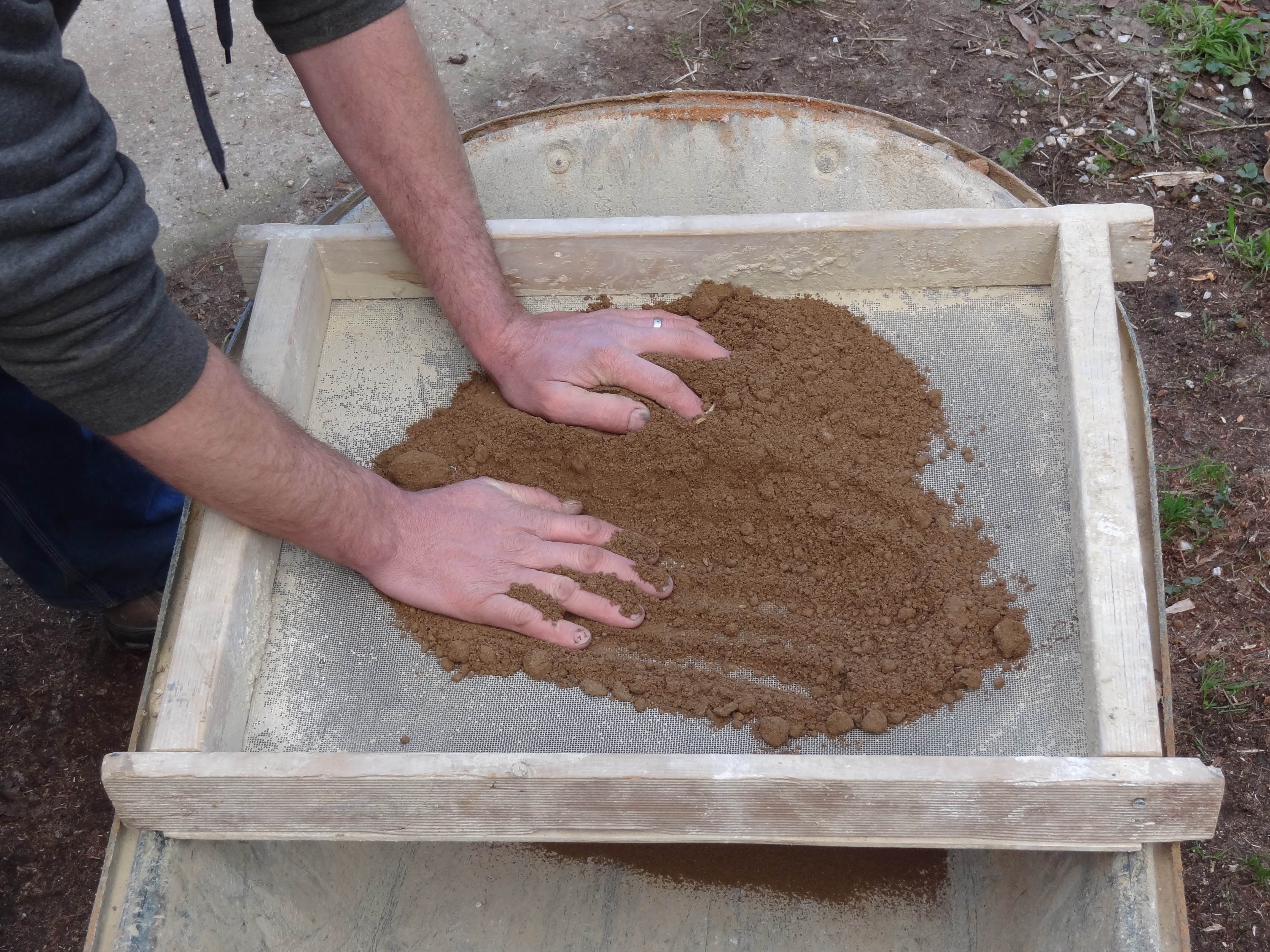 The other amazing property of clay is that it is “able to absorb and desorb humidity faster and to a higher extent than all other building materials.” (Minke 2000) This fact and physics means that clay balances indoor humidity. Studies conducted by The Building Research Institute in Kassel, Germany have shown that the indoor relative humidity of earth buildings is maintained at 50%. (Minke 2000) Many other beneficial qualities of earthen construction are outlined in Gernot Minke’s book “Earth Construction Handbook”.

Two facts form the basis for what I have come to know from many years of working with clay as a building material:

Starting at the beginning, I will discuss selecting and processing clay into a useable form. Then I will move on to the application of clay-based plaster, then finish with a discussion of re-hydration of clay plaster.

When selecting clay for building, visual observation is a good place to start. Most likely the clay will be found in subsoil, the soil lying just beneath topsoil. Subsoil will be a mixture of clay, silt and sands. Ideally the subsoil will have been excavated and heaped in a pile. If so, an initial test is done as we can then see how the subsoil clumps and how those clumps resist erosion. This is a helpful simple binding ability and erosion test. It will also indicate a basic grading of the subsoil as the rain erodes the clumps which are naturally produced cob or adobe. If you can pick up a clump the size of a grapefruit without it breaking, you have pretty good instant cob. If it falls apart, there may be too much aggregate in the subsoil, or it may be too wet. Evidence of cracking in the clumps will also show decent clay content. The longer the excavated subsoil is out of the ground the better, as it gives a longer time for the erosion test. If the clumps can survive out in the rain with little sign of erosion, it will be a suitable building material as this shows very strong electrical bonds between the clay disks.

From this initial observation we can move into producing clay slip. The production of clay slip is a conscious decision by the earth builder to loosen the electrical bonds between the disks. Once achieved, other materials can be combined with the clay disks to create building products. Upon drying, the electrical bonds will bind the clay and the introduced materials together into whatever building product we are creating. Some clay subsoils are quite happy to be mixed with water, others not so much. Generally, the easier it is to make the slip, the more prone to water damage and erosion the dried building material will be. Conversely, the harder it is to mix the subsoil into slip, the stronger and more water resistant the dried building material will be. Some of the best building clays need to be mechanically crushed before they will mix with water. It is worth noting that this does not take into account swelling and shrinkage of different clays. But typically the more a clay swells, the stronger the binding force of the clay as it dries. Slip can be mixed in a bucket with a drill and mixer attachment, or a specifically designed slip machine.

It is believed to be best practice to use clay slip when producing building products, but earth-building materials can be produced from dry clay subsoils as well. In this case, the water in the mix loosens the bonds at the time the material is made. It is generally considered to be an inferior approach, as all of the electrical bonds are not loosened, resulting in less binding force in the end. Is this a problem? Perhaps sometimes, but many successful projects suggest it is not always the case.

Once the clay slip has been produced and a suitable plaster mix formulated, application of the plaster can commence. The plaster consists of clay, aggregate, often fibre, and water. The water is doing the job of keeping the clay disks, our binder, evenly spaced throughout the plaster. As soon as the water begins to leave the plaster, the disks will start to bind. Where does the water go? First, the water will slowly evaporate. Second, the suction of the substrate on the wall will pull water from the plaster. As the water gets sucked into the substrate some of the clay will get carried with it, into the substrate. This is a very important point. Depending on what we are trying to achieve, we can manipulate the suction of the wall and plaster clay content to achieve the best outcomes. Different substrates have different suction rates and if there is no suction, the clay plaster will not sufficiently bond with the substrate. It is important for the plaster to get sucked into the substrate and fuse with it. Since clay does not ever set, the new plaster will physically become one with the substrate, as long as it fuses with it. As some of the clay in the plaster will get sucked out, we may elect to have higher clay content in the plaster than is necessary for stabilization of the plaster to accommodate this fact. Conversely, misting the substrate with water before applying the plaster will take away a lot of the suction. In this case, fewer clay disks will get integrated with the substrate and theoretically you will have a weaker bond. Is this a problem when applying clay plaster to a clay wall? Hard to say, as once dry, the whole will be one. Thus the use of water in clay plastering depends on the situation. Clay slip is sometimes used instead of mist to moisten a wall before plastering. This fulfills the same function as having higher clay content in the plaster. Using clay slip instead of water is beneficial when the substrate is excessively silty or when applying plaster to straw bales or light straw clay. When trying to get a really strong bond for repairs or upside down work, the substrate is not misted. The plaster also has higher clay content than is needed. When applying a finish coat plaster over an earth substrate, the wall may be misted to slow down the suction and give the plasterer more time to finish the work. Another way of getting more time to finish the plaster is to do two applications of plaster, one after the other. The first coat of the “Wet in Wet” approach takes care of most of the suction; this means that the second coat has greatly improved workability. One should be careful. If too much water is applied, the clay will reach saturation point and slumping of the plaster will occur.

Once the plaster has started to dry it is usually polished or compressed. This is necessary because the water that was required to separate the electrical charges has left microscopic voids in the plaster as is dissipates. The voids create weakness in the plaster and compressing closes up the voids, making a stronger end result. Timing of compression is important. Too soon and clay will be pulled out of the plaster and to the surface. This may weaken the bond of the plaster to the substrate and pull the plaster apart. Too late and no compression will occur. In this case, more water is added with mist or a sponge to try to remedy the situation. This is a basic form of re-hydration. 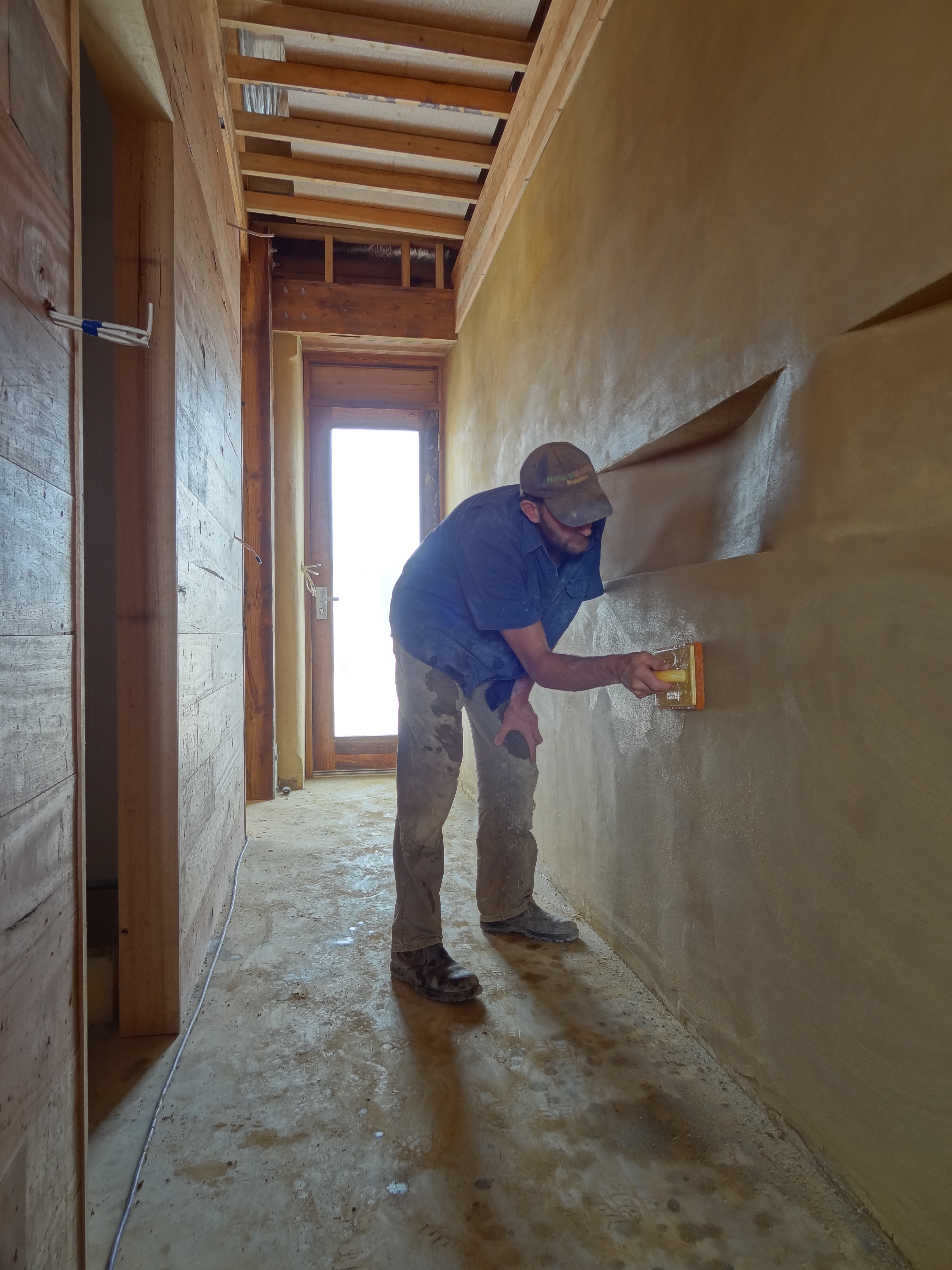 Re-hydration of plaster is a technique used to repair and finish off clay plasters after they have dried. Re-hydration can be used to eliminate slump cracks and even a poor finish. Most often, re-hydration is used when repairing clay plasters. The idea is too add enough water to the plaster until the electrical bonds loosen, then the plaster will react like it did when first applied. Using this approach, repairs can be made to a clay-plastered wall. When the repairs are dry, the area around the repair can be re-hydrated or the whole wall re-hydrated. In this way, the repairs will literally become part of the existing plaster and invisible. Re-hydration is achieved through misting the clay plaster multiple times. A water sprayer or fine hose is used and water is applied to the wall until just before the clay plaster starts running down the wall. The wall has only so much suction. Try to mist too much, and you end up with erosion. So just before erosion occurs, move to a new area. Mist the whole area, or wall, and wait for 5 minutes. Then repeat the process, and wait another 5 minutes. The number of times the wall needs misting depends on the clay in the plaster and the plaster mix. Three to four times are normally necessary. By the fourth time, the surface of the plaster should be soft. Ideally the top 1/8th inch will move when a finger is pressed into it. At this point, a sponge or sponge float is used to re-shape the plaster before a finishing trowel is used to re-finish the surface.

As clay never sets we have the ability to use water to manipulate it. The amount of water used, coupled with the suction of the clay, allows us to maximize the benefits of using clay as a building material. No other building product is so infinitely recyclable and repairable. Once the mysteries of clay have been revealed to you, anything is possible.