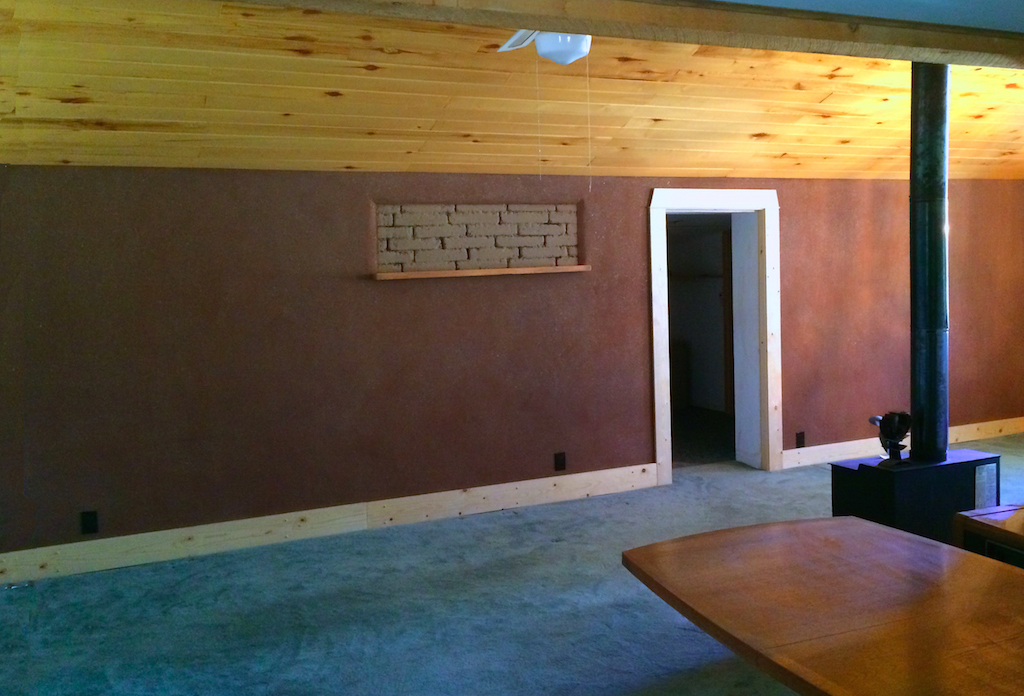 Here in the Southwest adobe construction has a deep-rooted history and an inherent beauty that so often gets covered up and never seen.

We were fortunate to be asked to restore what we thought was an interior “adobe” wall in southern New Mexico. A roof leak and years of normal wear had the owner coming to us to add our touch.

The current owner is more like family to us since we’ve done many remodeling projects for him and had many a meal around the dining room table.

The original house was owner-built around 1984 using locally harvested clay soil. Over the years more conventional framed rooms and roofs were added including a second story. Like a lot of construction around these parts of the country some of the materials and workmanship might be considered sub standard mostly due to limited funds and work force.

This was evident where an add on roof was improperly flashed and over time water had worked it’s way down one of the original exterior walls that was now an interior adobe wall causing water damage with peeling clay and sand plasters that had been painted over with coats of latex paint. 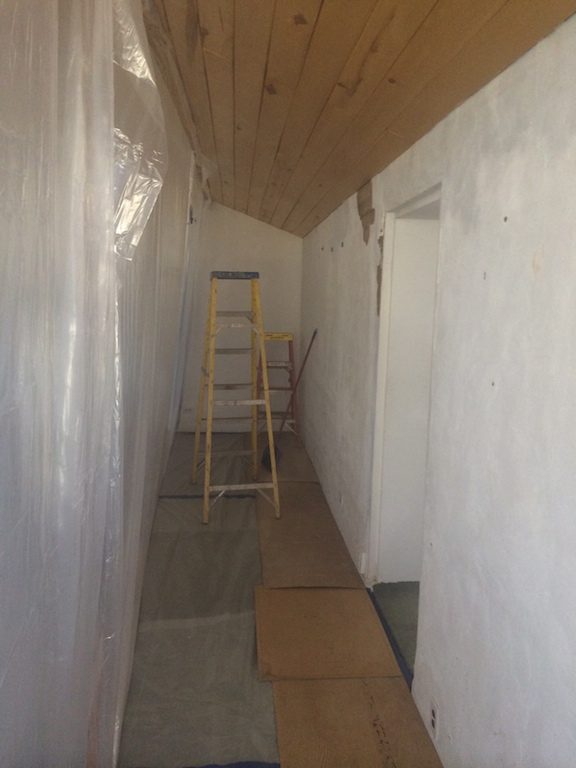 How should we approach this? A few thought we should just put on a new coat of white paint and call it done, another cover up. As much as we love to do earth plaster on Adobe walls the concept was to just expose the adobe.

Let the fun begin!
The first step was to cover and protect the carpet and add a dust screen for the nasty work ahead.

Donning work gloves, safety glasses and dust masks we grabbed our chisels and hammers and went to work. What we thought would be a simple task, while in theory it was, the process turned into a laborious time-consuming two-day affair. In hindsight we should have brought in an air compressor and pneumatic chisels, because the clay and sand plaster mix used to cover the adobe bricks were hard as rock and bonded like glue. We both took a swing of the hammer and then sort of glanced over at each other and our eyes said, “Oh man! What have we gotten ourselves into?” 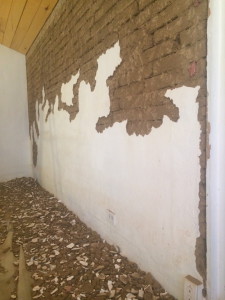 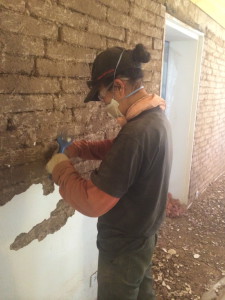 Six hours later we had had enough for one day and called it quits. After all, there was no real time commitment so why kill ourselves. We stood back and looked at the day’s progress and took some pictures. It wasn’t until we came home and viewed the photos on the computer screen that the story of the day’s work popped out. We had to laugh, look at Tom’s wall then look at Satomi’s wall. Same process but totally different results. Why were we laughing? Satomi had unconsciously created another art wall.

By the end of the second day of demolition our chipping was complete, the debris cleaned up and ready for the next step. Again we always thought we would just expose the adobe and call it done. 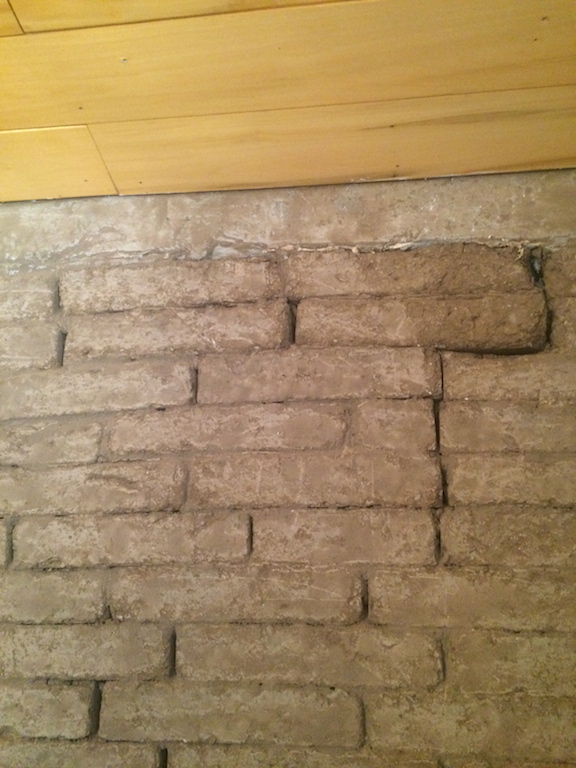 For the most part the adobe work might have been acceptable but on the upper east side of the wall, for some reason, the amateur masons forgot the basic rule of block laying. So the running bond was abandoned and the blocks were just stacked one on top of the other. Beside that, there were holes, gaps and gringo blocks showing as well as out-of-code electrical wiring along with the concrete stem wall and upper concrete bond beam to deal with. So basically the adobe wall did not look that presentable.

Like most remodel work, the nature of repairs, and hidden or unforeseen issues, dictate the work. In this case the condition of the wall meant repairs and replastering was in order. Hurray, what we always wanted to do anyway, to make another earth art wall.

So the three Ps (Prior Proper Planning) sort of went by the wayside and a new approach was in order. Satomi spent her time cleaning the adobes, vacuuming and then repointing a lot of the joints (adding materials back into the joints). Tom started on electrical. Back to the hammer and chisel. Boy the adobe was hard, what’s up with that I thought. Must be that great NM clay soil. 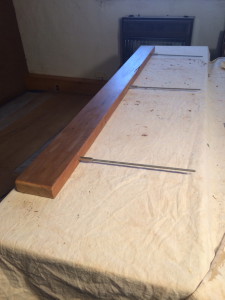 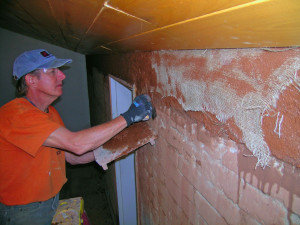 My style is to use metal junction boxes, screw connectors and metal plaster rings rather then plastic boxes. While there were only three electrical boxes that needed replacing, the cutouts and 20 feet of channeling for the replacement barriable UF cable turned into another grueling task. With the electrical rough-in finally complete we were about ready to plaster.

There was one more detail that we came up with; a truth window shelf. Truth windows are a concept that caught on with straw bale construction and many times incorporated into what are referred to as Nichos.

The owner is a wood worker so I found a suitable scrap in his shop and went to work. I drilled holes through the adobe wall. Then I attached threaded rod to the shelf, fed the rod through the wall and secured it with fender washers and nuts.

Finally we could plaster the wall. Our basic clay straw mix was chosen. We began with a clay slip, a mixture of finely sifted clay and water, which acts like a primer and in this case applied with a 4” brush. We immediately followed with a 10mm toweled-on base coat of clay, washed plaster sand and finely chopped straw. Looking good. For the next day’s final coat we set up floodlights since by now the wall was quite dark due to the new color. Since the dust phase was over, it was time to remove the plastic dust curtain and give the place a preliminary cleaning prior to the next day’s final plaster.

For us it’s always fun and educational to watch how plasters dry. Edges start first and work towards the middle. Thickness also plays a part. Rapid drying can cause cracking. Too slow can cause a wall to get surface mold—not something we have seen on thin adobe plasters. Mold is more common on thick straw bale base coats applied in the winter.

Now it was time for the finish plaster. Since it was an interior surface a 5 mm coat was all that we felt was required. Thin coats can be a bit tricky especially in hot weather when the surface dries too quickly so one needs to work fast and efficiently. We call this a straw finish because we go over the wall with sponges to expose the straw. Now it was time for the knotty pine trim, final electrical, one more thorough clean up and we were done.

Another beautiful adobe wall or was it?
So here I have been working on this article. What’s the saying, “timing is everything?” Yesterday I ran into Will, the original owner of the property, who had sold it to the second owner Jane. We started talking about the land next door that was sold and some how he brought up the fact that he had sold her the piece. He still owns the adjacent lot to the east and his building came into the conversation after I mentioned the wall we had refinished. I was saying how hard those Adobes were. He said the same guys built his cabin. I said I thought Jane built her place. He said she helped but there was a fellow from out of town that did their work, not only hers but his place too.

Sorry to the purist but for us this was a great project and another opportunity to expose some hidden beauty.