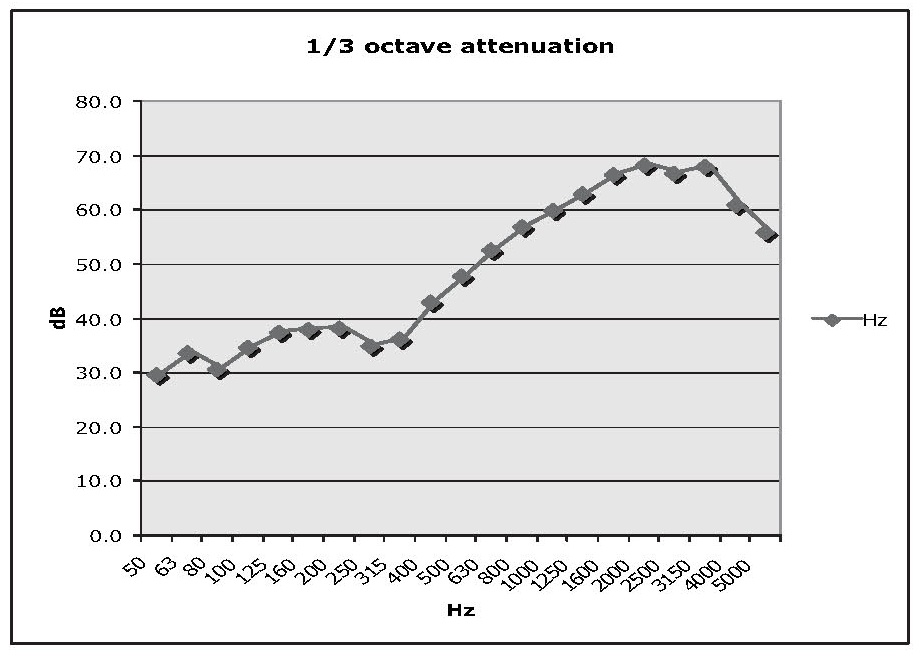 This article appeared in TLS #53.  The topic of this issue is Moisture.  It contains an extensive article about Moisture Basics and Straw-Bale Moisture Basics (by John Straube, edited by Bruce King)  it also includes articles on moisture meter accuracy, moisture sensors, seismic resistance, and plaster testing.

by Rene Dalmeijer – The Netherlands

In June 2003, Jasper van der Linden, a building engineering student at the Eindhoven Technical University, Eindhoven, The Netherlands, tested the sound isolation of an earth-plastered straw-bale wall. Rob Kaptein of RAMStrobouw and I assisted in carrying out the test. The test was executed in a true acoustic test chamber according to ISO 140-3. We were able to execute a consistent test giving a good indication of how well a plastered straw-bale wall retards sound.

Based on the outcome of the test, it is to be expected that a reasonably well-designed and built straw-bale wall without acoustic defects (like protruding post-and-beam members) will perform in the region of 53dB and upwards (55dB with A weighting; “A-weighting” means the impedance is corrected to approximate human hearing sensitivity, which varies depending on frequency). The 2dBA increase in performance when compared to the test is mainly because we used very thin (worst case) plaster thickness in the test sample. Normally earth plaster finishes would be thicker. This puts the performance of a straw-bale wall at more or less the same level as a decoupled brick cavity wall and even exceeding it in the critical low-frequency region.

Most everyone who has been in a straw-bale building has had the sensation that interior sounds somehow seem louder, because interior sounds become more distinct for not being drowned out by background noise coming from the outside. This is a clear indication that straw-bale walls work very well as an acoustic insulator. Normally built structures depend on high mass for good sound insulation. But there is also another way of achieving good sound insulation, which depends on a damped cavity surrounded by two not-sostiff membranes with sufficient mass. A straw-bale wall, specifically with earth/clay plasters, is an excellent example of this alternative way of achieving good sound insulation, as the test result clearly illustrates.

The test was executed in the acoustic lab of the Eindhoven Technical University. The test and test facility is according to ISO 140-3 which is to test the sound isolation of building aperture of two acoustically separated chambers (the test sample is placed in an aperture between the chambers). Although I am aware of the limitations of the test facility for testing a wall system, we have endeavored to make this test as accurate and as representative as possible. The aperture’s size (ISO 140-3 std) is 1.88m2 /20 ft2. The tested straw-bale wall section had the following configuration: 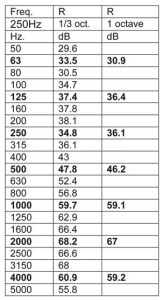 The chosen sample structure was to be as representative as possible of a normal earth/clay plastered straw-bale wall structure as used by the experienced straw-bale builder Rob Kaptein of RAMstrobouw. Rob was also responsible for manufacturing the test sample. The graph and table summarize the test result.

[Rene’s comment on the measured performance: The result can be expressed as 53dB according to A-weighting. Actually expressing the sound isolation value in one number (i.e., 53BA) is a simplification. In actual fact, giving the performance at each of the various frequencies is much more meaningful.]

Generally this is done at either one octave intervals (1/1oct) or at one-third octave intervals (1/3 oct), the last giving even more detailed information.The graph and table show both measurements (not A-weighted). The dip at around 250Hz is due to the transition between the masws and damped cavity odes of operation of the test sample and should be largely disregarded as part of the vagaries of a test.

The 53dBA test result might seem low but in fact is very good. Most conventional wall systems including a brick cavity wall with much higher mass have a lower performance. Specifically interesting to note is the 2-3dB better performance at very low frequencies of the straw-bale test sample when compared to brick-wall systems. Nearly all wall systems, including stick frame, are able to sufficiently subdue high-and mid-frequency sound, but low-frequency sound is problematic. In practice, better performance at low frequencies is worthwhile because it means that the ever-present background noise in suburban areas is perceptibly reduced.

Besides sheer mass, low stiffness with sufficient mass and acoustic decoupling are very imortant for acoustic sound insulation. The relatively low stiffness of a straw-bale wall with earthen plasters is ideal. The fact that the cavity between the two plaster shells is filled with straw provides excellent acoustic damping. Beware and be careful to fill all cavities and voids with very light straw/clay. Avoid any direct mechanical contacts between the inner and outer plaster shells, as these will seriously degrade sound damping performance. Contrary to what you would expect, loosely packed bales will perform better than very tightly packed bales. Extra thick (>35mm) earth plaster specifically improves low-frequency performance. Cement and lime plasters perform almost as well but earth plaster with lots of straw is the best due to a lower modulas of elasticity (stiffness). Applying significantly asymmetrical plaster thicknesses helps to avoid coincident reverberation of the inner and outer plaster layers. The thicker plaster layer should be on the sound source side of the wall. Pay a lot of attention to all openings and edge details; these are the weak points. An air leak of only one sq. mm will seriously degrade performance. Door openings and windows are literally acoustic holes in the wall; these need special detailing and attention to even remotely approach the acoustical (and thermal) performance of the surrounding walls. Even double doors generally show poor performance compared to the wall. The gaskets and seals in the doors should be double or even triple, but even then there is a problem as, over time, the seals will degrade and leaks will occur. The type of door you are aiming for is more like a steel watertight door in a ship than a house door with multiple closing bolts and tightening clamps. (All of this only if acoustical performance is essential.) 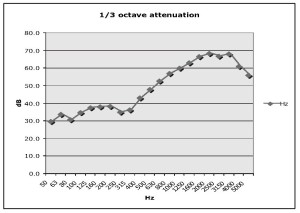 In conclusion, I would like to emphasize that, due to the nature of a straw-bale wall (an excellent sound barrier), the wall is not the problem; the connections between the

wall and all other elements incorporated or surrounding it are. In other words, it is the same issue as with thermal and moisture performance. I strongly suspect that most sound isolation tests executed on straw-bale walls are measuring the defects of other structural components or mistakes in the test procedure (a non-calibrated sound source, background noise, and such).

Here are some simple rules of thumb depending on the type of acoustics you want, e.g., very lively to very well damped. Soft acoustic instruments require a “live” (reflective) room. Loud amplified sound needs a “dead” (absorbtive) room. The single most important parameter is the reverberation time and level. The harder the surfaces, the livelier the sound. A bathroom is lively, hence your strive to sing even if you can’t. The opposite is standing on top of a snow-bound hillock [small hill or mound] – virtually no sound reflects back to your view. The bigger and harder the room, the longer the reverberation time, e.g., a cathedral. Next the relative dimensions: an oblong box (like Concertgebouw Amsterdam) approaches the ideal. Preferably the relative dimensions are approximately 2 to 3 to 5; this ratio will avoid the formation of dominant harmonic resonance and standing waves. The exact ratios needed for a given acoustical requirement depend on the size and acoustic reflectivity. I personally prefer rooms without parallel surfaces, thus avoiding standing waves. I think if you finish a room with earth/clay plaster on straw-bale walls, with wooden flooring and a well-pitched ceiling, you will have quite acceptable acoustics for musical performances. If it’s too lively, you can always add some damping afterward by placing soft furnishings in the room or hanging curtains on the windows. A bigger audience also helps.

Good acoustic isolation is definitely one of good merits of straw-bale walls. It should be seriously considered for purposes where sound isolation is of importance. It would be hard to find a more affordable solution to building sound studios, quiet houses in noisy neighborhoods, or noisy workshops in residential surroundings.

Rene Dalmeier has been interested in straw-bale building since 1998. In June 2005, he finally took the plunge and turned his hobby into a profession by becoming a full-time straw-bale builder.

A whisper = 15 dB … Normal conversation = 60 dB. dB: Abbreviation for decibel(s). One tenth of the common logarithm of the ratio of relative powers, equal to 0.1 B (bel).

ADS FOR ARTICLES IS HERE!!!