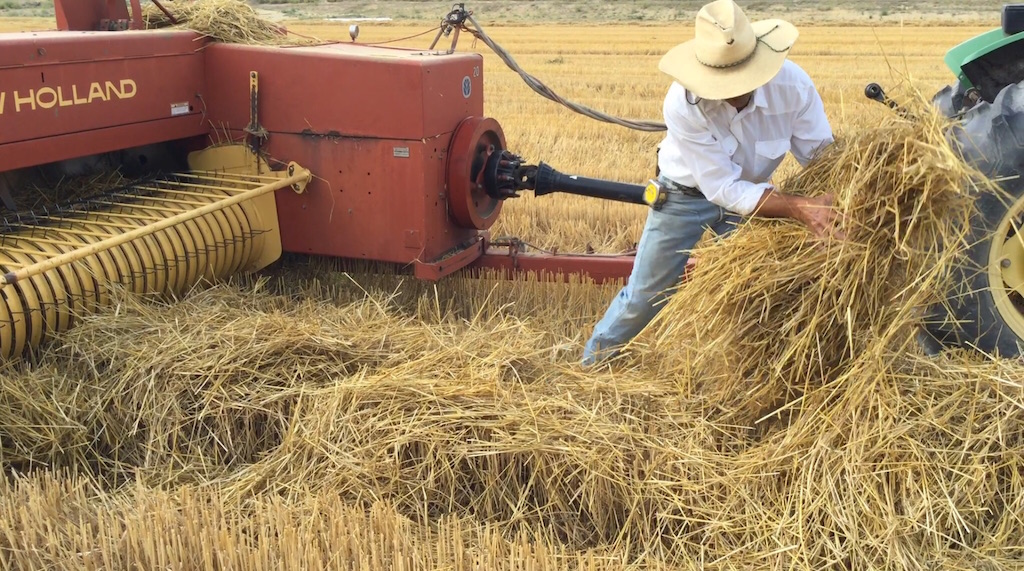 The dried stems from harvested small grains produce straw. The majority of small grain grown in the US is wheat. A good stand of wheat can produce an incredible amount of straw after harvest. Straw is often regarded as a wasted by product, but some farmers are actively finding and creating markets for their straw. 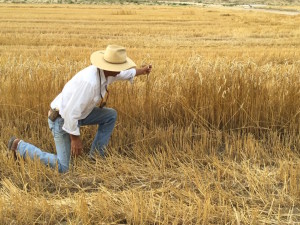 Straw before being cut for baling 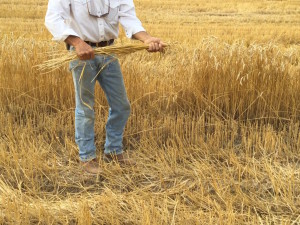 Long straw stems prior to baling

A number of producers manage their fields of grain in order to be “weed free”. The fields are inspected by an outside entity for noxious weeds while the wheat is actively growing and can be certified as weed free if it passes inspection. The straw is then baled with a special colored twine to designate it as having been inspected and certified. Certified straw is then used on soil reclamation projects after pipelines, road projects, or energy projects have been completed to help with soil stabilization and cover. The straw producer incurs an added cost of time, material and the certification process in order to have their straw certified weed free.

Other producers bale the straw for livestock bedding. Some small bales go directly for just animal bedding. Some cattle ranchers buy big or round bales of straw to use in snow country. The straw is rolled out or scattered on top of the snow. The feed wagon follows and hay is then spread on top of the straw. The hay is utilized better because it does not get trampled into the snow as badly and is not wasted. The cows will also eat some of the straw as they are eating their hay. After the hay is eaten the cows then have an insulated place to bed down, conserving calories and energy. Other farmers are actively pursuing the strawbale-for-housing niche.

All straw bales are not created equal though. If you are thinking of building a straw bale home, you should think seriously about obtaining straw bales from a producer who is baling straw for that specific purpose. Why? Producers who are serious about creating a market niche in the straw bale building industry are looking for ways to improve their product and make a better bale. There are several things those farmers do that differentiates their building bale from, say a bale made for animal bedding.

Bale Density
This is probably the most important attribute of a good building bale. Straw bales for a home should be very dense or compacted tightly. Well compacted bales will be solid, have very tight twine, and hold their shape when picked up. Even though they might be pounds heavier, they are easier to work with. They stack well, trim well, and are easier to plaster. Dense bales are a must for anyone thinking of a load bearing or hybrid building system. There are attachments and components on baling machines, balers, that allow the producer to increase or decrease density. 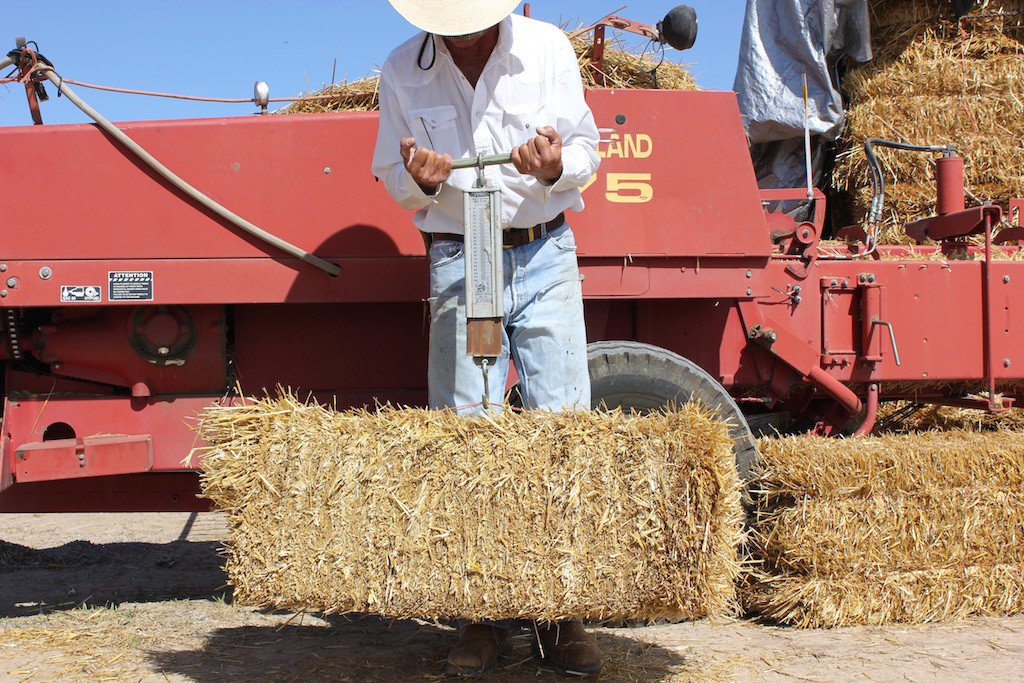 Moisture
When wheat is harvested the stalk, leaves, and seed grains have already lost excess cellular moisture. Straw could be baled immediately after harvesting the grain. Virtually all farmers who have baling equipment have that equipment for baling hay. Hay producers have to pay particular attention to the moisture in their windrows at the time of baling. Most farmers have meters on their balers and tractors that display the amount of moisture in the crop going thru their baler every second or two. Some have hand held meters that can be inserted in the bale to determine the moisture content. 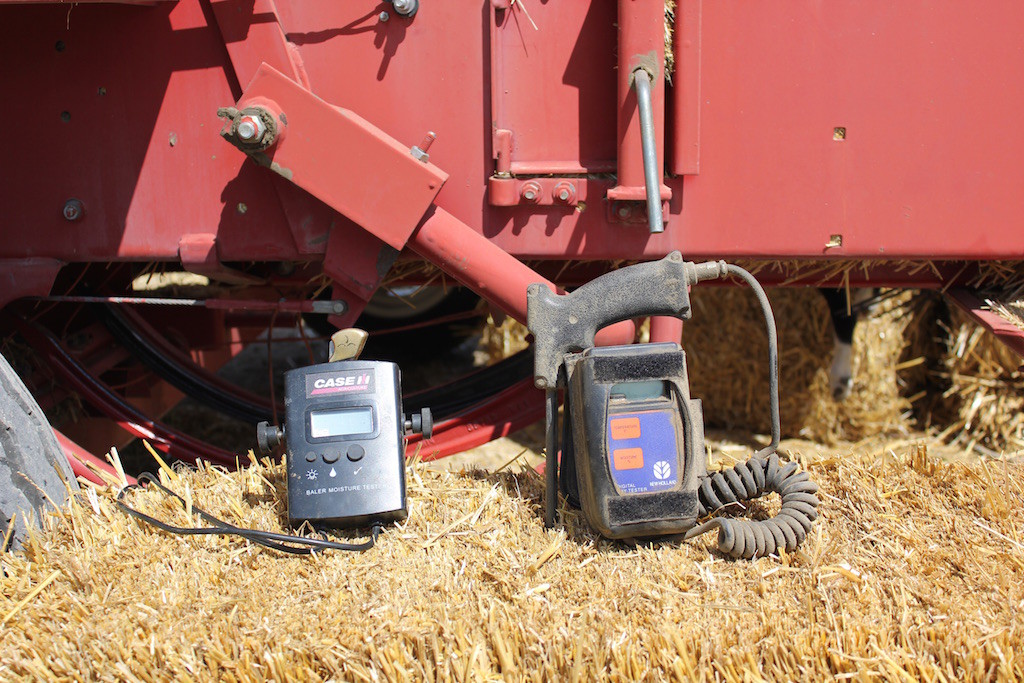 If hay has too much moisture it will mold. If it has too little moisture and is too dry the leaves shatter and the producer loses tonnage and feed in the handling process. This principal holds true for straw also. Lots of building straw is baled too dry. The stalks or stems can shatter and break excessively as they are being compacted in the baler. Producers who are baling straw for bedding or soil reclamation aren’t as concerned about this factor or might not understand that it can make a difference in straw used for building. Producers of building straw know that if the straw is baled in the morning on dew moisture, or at night when it has cooled off and reabsorbed some atmospheric moisture it is more pliable and flexible and less likely to shatter and break as it is baled. About 14% to 15% moisture seems to work well in most operations.

Bale Shape
Balers have all kinds of adjustments for tension, length, and shape. Most bales end up being about 36 inches in length. This bale length works very well in most baling equipment. A 36 inch length bale also works well with the 14” x 18” balers. Corners and buildings constructed with a running bond like bricks go up easier with this length. Although a baler can be set at 36 inches you will have some bales lightly smaller or larger because of variations in the windrow density and ground speed. Bale producers who are making bales for the building industry should make sure that an equal amount of straw goes into each side of a bale for equal density.

There are adjustments on the material feeding system on balers to insure that the fold side of a bale is the same density as the cut side. You can check this yourself by seeing if both pieces of twine have the same amount of tension on them. Minimal differences are OK and can be compensated for. Good practice is to alternate cut and fold sides, not stacking all the cut sides of a bale facing one direction and the fold sides facing the other. A lot of times, unequal density from side to side is not even visibly apparent to the producer until a baler is set for a high degree of compaction. At that point, a knowledgeable producer who is making bales for building will adjust the feeding system on the machine so density is even.

Clean Straw
A combine internally separates the stem from the grain head. The grain heads are then shredded so the individual kernels can be separated from the chaff, a protective covering of the individual seed or kernel. The chaff is expelled from the rear of the combine slightly differently from the straw. Individual producers can improve the performance of chaff and straw separation by simple modifications where the straw and chaff exit the combine. Plaster can penetrate and bind to the stems better if there is less debris. 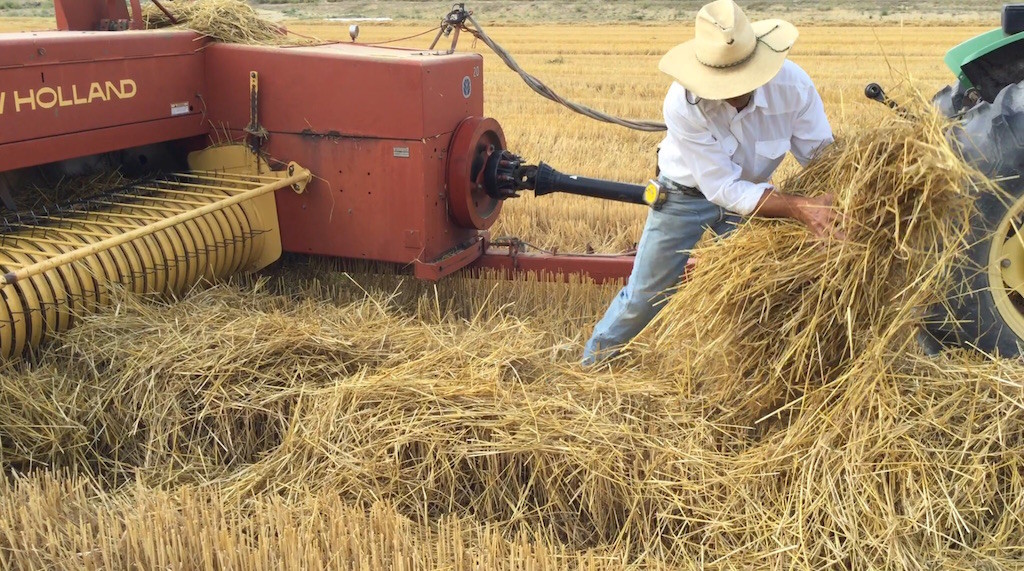 Straw that is clean of debris is the most desirable

Straw Length
A lot of wheat producers or custom cutters only cut off the top part of the wheat plant. They position the cutting head of the combine to take all the grain heads and a minimal amount of straw. Since they are not taking in as much extra material into their machine, they can cut and harvest a field faster and more efficiently. There is less material to separate from the grain and the producer can gain a small percentage of grain because of this. A farmer who is producing bales for the straw bale building niche understands that folks want the stems in the bale as long as possible. They will set the cutting head of the combine lower to the ground in order to get more of the stem. They have to decrease the ground speed of their combine in order to not overload the grain separating and cleaning systems and still get the maximum amount of cleaned grain.

The extra time harvesting and possible loss of grain is not worth the effort for the custom cutters following the harvest and for many farmers, especially with a very limited straw market. Does this mean you shouldn’t buy a shorter dry-land straw from your neighbor in western Kansas? No. Longer straw is better but I believe that producers with good baling methods and great bale compaction can more than compensate for “shorter” straw. A baling machine will be cutting the stems anyway on each plunger stroke. Depending on the model and brand of the baler, the maximum length of a stem in a bale will be cut at 16”, 18”, or at 23” in the rare three string bales. 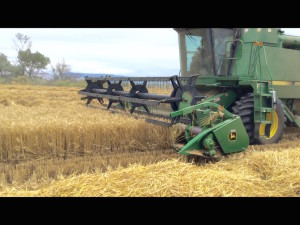 Setting the height of the combine… 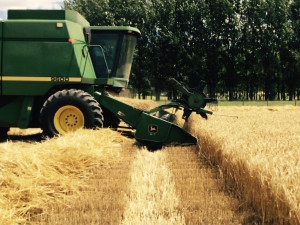 effects the quality and length of straw

Most homes these days in our region are infill instead of load bearing. You don’t want a bale made of chopped straw but good, clean, well compacted straw works. I know that this opinion will open a can of worms but I believe a blanket statement of only using straw of a certain length will stifle the straw bale building movement. You decide what’s best for you in your application.

If you are thinking about building a strawbale house in the future find a straw producer and ask questions. Go look at their straw. Straw producers have a very limited harvest season for producing straw bales usually only once a year. Producers only want to incur costs and store bales on the number of bales they think they can market in a year. Most farmers have hundreds of thousands of dollars or millions invested in equipment, fertilizer, seed, fuel, labor, water, maintenance, parts, storage, and the land. Please don’t insult a farmer by trying to bargain on their commodity. I have found that vast majority of folks in the ag industry are more than fair and honest and even tend to under value commodities. Support your local farmers as much as you can if they can meet your needs and as Jeff says, “Bale on!”

Dave Swinger lives in Western Colorado and has been producing quality hay and straw since 1995. “I was bitten by the strawbale bug in 2012 and have since discovered there is no cure.” He and his wife, Lisa are in the process of building their own home and outbuildings with straw while supplying others with strawbales for their homes and projects.