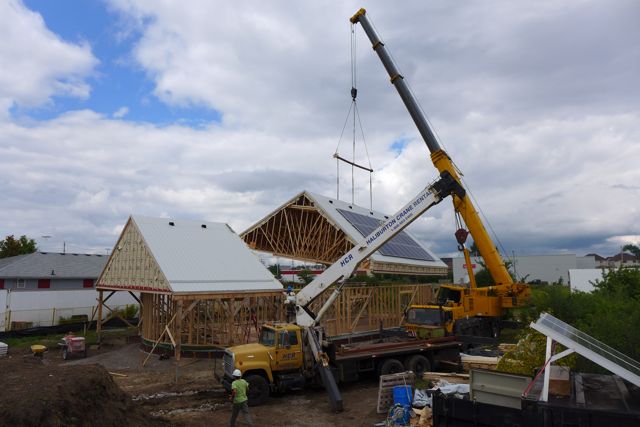 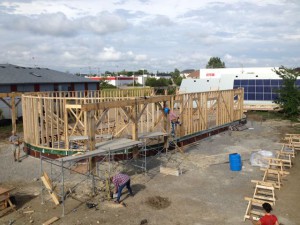 This system uses a conventional frame wall on the exterior of the assembly, using stud spacing and header sizing directly from local building codes. The straw bales are then stacked entirely on the inside of the frame wall and plastered only on the interior side. The stud cavities are filled with dense-packed cellulose insulation, and the exterior of the wall is sheathed and cladded in a conventional manner.

The Straw-Cell wall system may seem to go against a fair bit of “conventional” straw bale building ideology, but it has a lot to offer.

Roof on, ready for bales (photo courtesy of Ben Bowman) 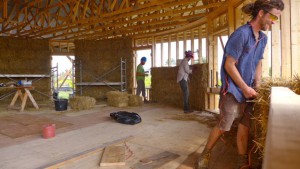 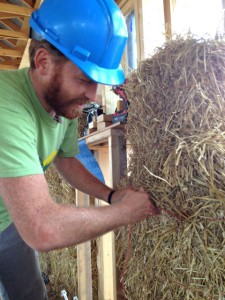 All of these advantages spoke to the Endeavour crew as we were planning a 2,400 square foot office building for a local teachers’ union. Our goals were high performance (in the PassiveHaus range), low maintenance, use of local and sustainable materials and a reasonable budget. The Straw-Cell method seemed to meet all of these goals.

The frame itself was quite straightforward to build. I remember being told prior to my first ever straw bale project that the beauty of bale building was that a beginner didn’t need to learn how to frame a wall. However, conventional framing is designed to be quite easy to do, and is certainly easier than any other form of light or heavy framing I’ve seen used on bale buildings. And because it’s conventional, help – in the form of professionals or good book and online resources – is easy to find, if needed. In our case, the building has round ends, which complicated the framing a bit. But still, standing a stud frame wall only takes a day or two… it’s the fast part of conventional building. 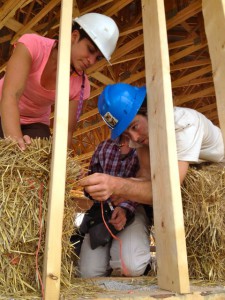 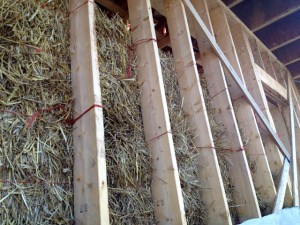 The roof of our building was built on the ground and craned onto the finished frame. Very quickly, we had created a well-protected place for our bales to be raised.

We added extra framing prior to the bales, to hold the places for doors and windows. This framing is very similar to that used for load-bearing bale walls, just simple frames (they are not load-bearing elements in this wall system) to hold the bales back at openings.

The bale installation went as quickly as we’d hoped. With no framing in the way except for door and window bucks, it was a very straightforward raising. Having the frame behind the bales meant that there were constant guides for keeping the bales plumb.

We tied the bales through to the stud wall to provide a tight fit, a plumb wall and to eliminate the chances of the wall bending or falling toward the inside when plastered. Baling twine and a slipknot made this a relatively quick procedure. We found that stacking one course and then doing the tying made the most sense.

Prepping the bales for plastering was also easy, as there was very little wood to have to cover. We didn’t use any mesh on the face of the wall. Mesh was used at the window and door openings, where a plastic mesh was used to cover the air barrier that wraps onto the straw from the exterior frame wall to provide for air-tight seams at all openings, and at the base and top of the wall for the same reason. 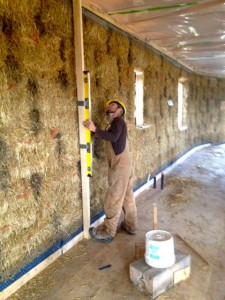 Checking plumb prior to plastering 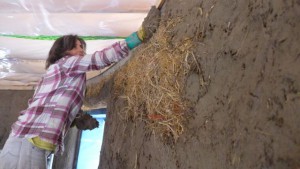 The interior of the bale walls were coated with a site soil earthen plaster, using our two-part, one-coat system. For this type of plaster, we hand-apply a thin clay-sand (approximately 1:3) directly to the moistened straw, and immediately follow that with a high-straw plaster (1 clay: 1 sand: 1 chopped straw, by volume). This high-straw plaster can be built up to the full thickness in a single application, anywhere from 1-4 inches. For this building, we left the surface of the plaster scratched in order to add a fine finish coat, but it can also be floated smooth and used as the final finish. 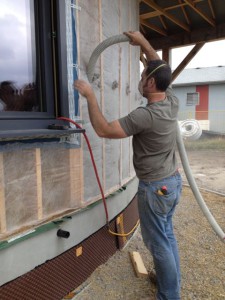 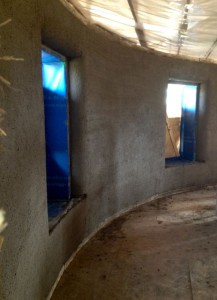 Base coat finished inside

The only issue we encountered was that our bales were a bit spongy, and the process of tying them to the frame left hollows that required a lot of plaster to fill. Better bales would have solved this issue, or so would horizontal strapping on the frame wall, which would stop the bales from compressing into the stud frame cavities. 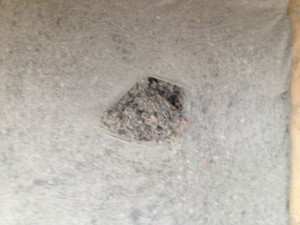 Hole in Insulweb to insert cellulose

The exterior of the building received a layer of a material called “Insulweb”, a poly-based, gauze-like sheeting used by cellulose installers to allow cellulose to be blown into cavities and held in place while allowing the blowing air to escape to achieve the required density (in our case, 4 pounds per cubic foot). In the future I’d rather avoid the use of this material, and apply our sheathing in courses, allowing the cellulose to be blown into the wall in 4-foot lifts.

However, to keep the entire wall system permeable, we had to ensure that we used a permeable sheathing as conventional plywood or OSB would not be permeable enough to ensure that moisture can move through the wall system at an adequate rate. The sheathing we chose is locally manufactured wood fiber sheathing from Western Louisville Fiberboard. We used a ½-inch thick material, as we needed to bend it around our curved walls. This material adds R-2 to the assembly, and has a perm rating of 25.9 perms, which is as good or better than any exterior plaster we might have used.

On top of the fiberboard we applied a vertical strapping to provide a ventilation channel, and then we used wood siding on the straight sections of the building and corrugated steel siding on the round ends. 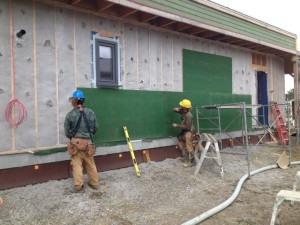 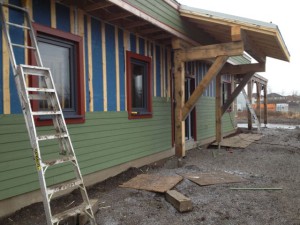 We tested the walls to be less than 1 air change per hour at 50 Pascals of pressure (>1ACH/50), prior to final air sealing details, so the assembly is both well insulated and air tight.

The exceptional performance of this wall system, in combination with lots of cellulose in the attic (R-100), means the building will be heated by small inline electric heaters in the air exchange ducting. We are two months into the winter here in Ontario, and without the heating system hooked up we’ve been keeping the whole building warm with occasional use of a 1500-watt electric space heater! 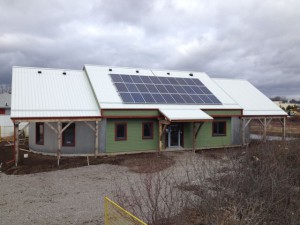 Overall, we were very pleased by the Straw-Cell approach. It likely won’t appeal to some bale builders because it deviates from the simple plastered straw approach. But for anybody who is considering using a frame of some kind to get a roof up overhead before baling, this frame has very moderate wood use, is easy to build and can meet any local codes. If some form of exterior siding is on your wish list, then this system really makes sense. For the builder or owner who really wants to stack the bales and plaster them, but to hire out the framing components, this system makes it possible for any framing crew to quote the building and to get the work done quickly.

Thanks to New Frameworks for the suggestion, we might be using this system again!